Are heavy sheep breaking the backs of Australia’s shearers? 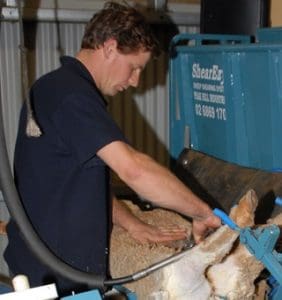 A sheep being shorn in an early upright shearing platform.

Shearers and contractors are turning down jobs where the sheep have become too big and heavy — mostly in crossbred and composite flocks — or the owner has presented sheep for shearing that are full or inadequately curfewed.

The problem has prompted at least one Victorian producer to stop his normal shearing to investigate upright shearing technology after his shearers demanded his composite ewes with saleable lambs be kept off feed and water for up to 48 hours before shearing.

With a greater industry-wide focus on feeding for condition score targets to maximise reproduction and genetic selection for liveweight, muscling and growth traits, many mature crossbred and composite ewe flocks can have average liveweights of more than 80 kg and sometimes over 100kg. Shearers are often also asked to drag out and crutch pregnant ewes weighing more than 120kg. Flock owners commonly empty sheep out for 12-24 hours before shearing. About 17 percent of a full sheep’s bodyweight can be gut fill.

Sheep producers generally sedate heavy rams prior to shearing, but the latest concerns are around heavy crossbred or composite ewes, many at maximum liveweights after a good season across Australia.

The issue has been raised with the Victorian Farmers Federation and the Shearing Contractors Association of Australia, raising the prospect of renewed research interest in finding solutions.

VFF Livestock Group president Leonard Vallance said the newly formed VFF Wool Committee was expected to discuss the issue of shearing heavy sheep, including a re-examination of shearing methods and wool harvesting. He said pigs were now being laser-scanned and processed robotically.

“Why can’t we scan a sheep and shear it with a robot?

“I just take the view that we’ve got a sheep with wool on it somewhere standing in the paddock, so how do we get it to that conveyor belt in the scouring plant?”

Mr Vallance said he would ask the wool committee to prepare a proposal for Australian Wool Innovation to conduct research in this area.

“It’s all just stopped; there needs to be substantial investment in it.”

VFF Wool Committee chairman and Merino breeder Steve Harrison said ewe weights were increasing and would be discussed at its first meeting.

“Everything is getting bigger and bigger.

“Farmers have got to understand you can’t expect the human body to do the impossible.

“If you want to breed ridiculously big sheep, you bear the consequences of it,” he said.

Mr Small believed some producers had lost sight of the efficiency issues with running big sheep.

“If you’ve got the animal so big that you can’t actually handle it, why not have two smaller animals?”

The straw breaking the shearer’s back?

Kangaroo Island contractor Paul McMahon said shearing heavy ewes would become a big issue due to the size they were being bred and difficulty getting farmers to empty them out adequately.

“It’s the straw that is going to break the camel’s back, eh?

“There’s a weight you can drag out and once you get past that it is just too much.”

Mr McMahon has been shearing for 30 years and contracting for 22 years, but sheep had started to get too heavy in the past 4-5 years. Years ago 70-75kg liveweight ewes were the norm, but now shearers were being asked to shear crossbred ewes that averaged 95kg and sometimes up to 110kg, he said.

“Physically it is like shearing rams all day – someone is going to seriously get injured one day or worse and I just hope it is not on my watch.”

Mr McMahon recognised that completely emptying sheep might present an animal welfare issue, and believed producers would have to breed more “user-friendly size” sheep or they wouldn’t be able to get the shearers to do the job.

“You are not going to get the shearers to do the job.”

Mr McMahon and his team recently walked out of a shed for the first time when the shearers were presented with full terminal lambs. He has also told another farmer to find another contractor to shear his 95-100kg composite ewes. Heavy ewes were more common among first cross and composite flocks, he said.

“They’re actually killing us and we can’t shear them – it’s dangerous.

“Where does the duty of care come in?”

Contractors to raise issue with AWU and NFF

Shearing Contractors of Australia secretary Jason Letchford said shearers were recognising that the size and weight of some sheep, especially rams, was reaching a “breaking point” and becoming an occupational health and safety issue with traditional shearing.

Mr Letchford said he has asked for sheep weight to be listed for discussion with the Australian Workers Union and the National Farmers Federation.

“There is a breaking point and we are very close to that in terms of size of sheep, unless we use mechanical (upright platform) shearing.”

Mr Letchford said there are no prescribed OH&S guidelines for the sedation of sheep, or in relation to their weight or size.

“WorkCover certainly won’t entertain anything along those lines; it would be completely out of their charter to go there.

“The over-arching law they keep pushing back to us is that contractor and the farmer have a duty of care to send our workers home safe and well every night,” he said.