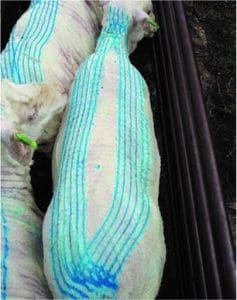 Bayer says an extensive study program in various regions throughout Australia has demonstrated that when applied as directed within seven days of shearing, Avenge protects sheep from blowfly strike for up to 10 weeks.

“For the first time they will be able to prevent flystrike as well as achieving the knock-down effectiveness that Avenge is renowned for in lice control,” said Mr Dell’Osa.

“The product has always been well-received by wool growers for its 100 percent effectiveness in killing lice, the fact that it’s rainfast, has four week residual lice killing power when applied within 24 hours of shearing and can be used up to seven days off shears.

“The results from our recent trials also demonstrated that the product delivers an added benefit of up to 10 weeks protection of shorn sheep from flystrike.

“In effect, producers will be getting double the benefit from a single pour-on application.”

Blowfly strike is mostly caused by the Australian sheep blowfly, Lucilia cuprina, known to become active in spring and summer when they can lay their eggs on moist wool or wrinkles on sheep.

However, in most sheep producing areas of Australia, Lucilia has been known to survive winters as post-feeding larvae or pre-pupae in the soil, and emerge when the weather warms, which is when the main flystrike period begins.

The eggs then hatch into larvae which abrade the skin tissue to feed on the fluids that exude from the damaged skin. This in turn results in significant tissue destruction, systemic toxaemia and sometimes death.

It is estimated that each year, treatment costs, and lost production associated with flystrike, costs the industry $280 million, according to Australian Wool Innovation.

“With this in mind, growers should be considering an effective flystrike management plan now so they are prepared for when the main flystrike period begins,” Mr Dell’Osa said. 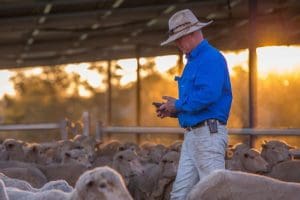 Wool grower Alistair Yencken of ‘Braemar’, Manilla on the north-west slopes and plains of NSW.

NSW wool grower Alistair Yencken of ‘Braemar’, Manilla, on the north-west slopes and plains said learning that Avenge was effective in preventing flystrike as well, for up to 10 weeks, was “great news”.

“I have 12,500 head of sheep and remaining on the front foot in relation to flystrike and other diseases is paramount to ensuring I receive maximum yields.

“The fact that one product effectively treats both lice and flystrike – for up to 10 weeks – is of great reassurance,” Mr Yencken said.

Bayer says application is simple, as the dose rate for lice and blowfly protection is the same. Sheep can be treated off shears or within seven days of shearing. Existing withholding periods for the product remain the same for wool and meat production.

The extended listing for usage of Avenge follows confirmation by Bayer that June 2016 marked the highest month in usage to date for its pain-relief product Tri-Solfen, indicating that growers are showing more attention to animal welfare than ever before.

“This is really reassuring to us. It not only tells us that there is an ongoing need from growers for products that address the everyday challenges such as pain management and disease prevention but that our products are working. Demand is increasing and we’re proud that we’re able to extend the usage and benefits of existing products such as Avenge at no extra cost to them,”Mr Dell’Osa said.