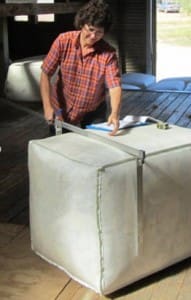 AWEX quality and technical manager Dr Kerry Hansford with one of the new wool packs.

New safer, wool bale packs are expected to be circulating in Australia by the end of the year.

AWEX chief executive officer Mark Grave told wool classers and growers at the AWEX Wool Forum in Bendigo this week that formal approval of the new wool pack standard was expected from the Department of Agriculture and Customs Australia by the end of August.

“We believe that its approval is imminent.”

The new five-panel wool pack was developed after rigorous testing. It has four sewn seams in the base, rather than two, and a bale fastening guide on each flap. The pack’s length remains the standard 1.25 metres, with a side seam width of 98cm+/–10cm and base seam at 70cm+/–10cm.

“It’s about trying to improve the standard of wool pressing,” Mr Grave said.

He told the forum that over-width bales of wool were still a problem for road transport and wool store storage. Growers and wool classers would hear more about pressing bales of the right dimensions and weight.

“It’s all about a duty of care; how do we actually make sure we are doing or the presser is doing the right job.

“The issue is that we are not doing – we are not closing the bale off properly, we are not making a square bale and part of that is the wool pack’s fault itself,” he said.

The dimensions of the new packs will be the same as those already being used in the industry to minimise any impact on farms.

Mr Grave said keeping wool bales at 1.25 metres long with a better, tighter structure would make them safer to move and stack.

Testing of the new packs showed they could be pressed to the same weights as existing packs, he said.

Mr Grave said AWEX did not know yet what the new wool packs would cost, but their manufacture did not involve extra material, only some stitching.

“We’re not expecting it to be a big imposition in cost at all.”

Mr Grave said because the wool supply chain is fairly short, if approval was granted in August, there would be an interim period for manufacturers to swap over to the new construction.

AWEX will also have an extension campaign to show the Australian wool industry how to press a compliant bale. This will include recommendations on using the bale flap guide and the ideal press box length to achieve bales within length.