ANZ positive on sheep meat and wool, but warns on China reliance AUSTRALIA’S sheep meat and wool sectors have benefited from the marked decline in the national flock, putting the industry leading to its strongest position in decades, according to ANZ’s agricultural insight report, Shear Brilliance.

But the report has also highlighted Australia’s ongoing reliance on China as a major sheep meat and wool customer.

“Any industry which relies primarily on one major buyer will unavoidably carry a reasonable degree of risk.

“For both the wool and sheep meat industries, the degree of reliance on China means that in the same way they prepare for drought, both sectors should always prepare for a scenario where their major market goes quiet for a period of time,” the report said.

The report released in Shanghai yesterday during ANZ’s latest customer delegation to Asia, has echoed other analysts in forecasting promising outlooks for wool and sheep meat, based on limited supply and strong international demand.

The report highlights the drastic decline in sheep numbers from a national flock of about 180 million in 1970 to around 69 million run by about 31,000 producers today, but argues rapid flock growth is questionable.

“For the national sheep flock to grow rapidly, it would theoretically require farmers with mixed and single sector operations to either switch out of cropping acreage for a number of years, or for cattle growers to switch to sheep.

“It seems questionable that this would happen with either sector,” the report concludes.

“As such, it is likely that national sheep numbers will remain roughly the same – not declining at the same rate as recent decades, yet not climbing rapidly either.”

ANZ Head of Agribusiness Mark Bennett said the domestic decline in sheep numbers was caused by a range of factors, including low sheep and wool prices and a shift from sheep to grain and cattle farming, which at the time provided more attractive export options and were viewed as less ‘hands-on’ to run.” 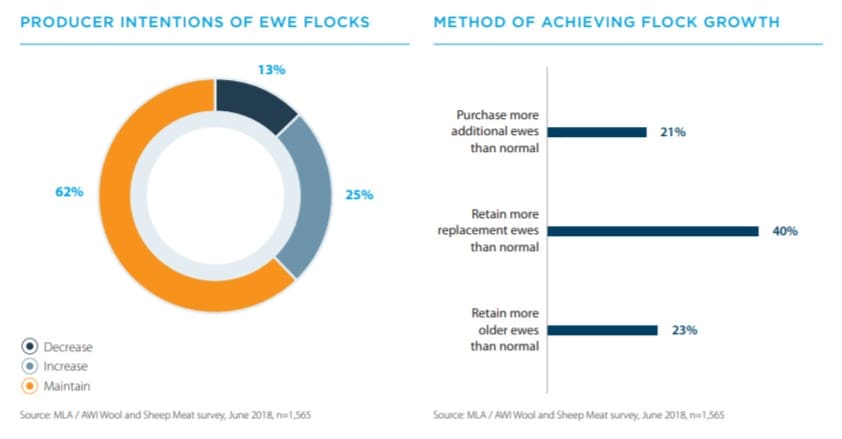 The report said domestically, demand for lamb and mutton has plateaued, with data suggesting many households are only eating lamb or mutton around once a fortnight.

“However, for sheep meat exports, the opportunities outweigh the challenges.

“Together with their fine new woollen clothes, global consumers increasingly want new kinds of safe, quality and affordable meat, and Australian lamb and mutton fits that bill,” the report said.

“Even if sheep meat makes up only a small proportion of the meat consumed in major global markets, this is still enough volume to continue lifting prices, and provide ongoing momentum for the industry.”

The ANZ report said that while China continues to build its flock, Australia and New Zealand remain the world’s two largest producers and the outlooks for both sheep meat and wool look positive.

For sheep meat, prices are high and are expected to remain so, due to low Australian sheep numbers which are estimated to grow by around 1 per cent per year from 2020. A lack of near competition, with the exception of New Zealand, also reduces the chance of a major oversupply.

Falls in domestic lamb and mutton consumption have stabilised and make-up around ten percent of the Australian meat diet, while sheep meat exports continue to grow. China is now the largest market for Australian sheep meat, while the Middle East and the US provide strong demand.

“While sheep meat may only be a relatively small percentage of China and the US’s total meat consumption, the sheer scale of these markets means large volumes of Australian product are required,” said Mr Bennett.

The report said the outlook for Australian wool is promising, while the growing world flock is focus is on sheep meat, creating limited wool supply. This has led to export opportunities, with China’s wool imports rising from around 200,000 tonnes in the early 2000s, to more than 350,000 tonnes in recent years.

“The fibre is rightly seen as a natural product, at a time when many clothing consumers are seeking to move away from the artificial alternatives.

“At the same time, global economic growth has meant millions more people are seeking to buy the quality clothing which wool represents,” the report concluded.

“That said, fashion can be fickle, and it is important that the wool industry is unrelenting in continuing to promote the virtues of its fabrics.”

Despite the rosy outlook, the ANZ report has highlighted a number of challenges for the industry.

“Wider political and economic factors such as animal welfare concerns, trade regulations as well as climate variability and biosecurity risks, are also issues that the industry must monitor and prepare for.”