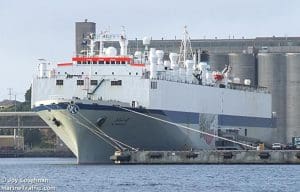 AUSTRALIA’S federal live sheep export regulator has admitted that decisions granting Emanuel Exports approval to export 58,000 sheep to the Middle East on the Al Messilah in June were made unlawfully.

In the course of preparing for the Federal Court trial, brought on by Animals Australia, the department has conceded that the export permit it granted to Emanuel Exports was invalid due to the official granting the permit not having the delegated authority to do so.

Federal court orders issued today identified the official as Dr Narelle Clegg, and said she did not have a delegation for DAWR to make a decision under the Export Control (Animals) Order 2004, resulting in procedural unfairness.  In her capacity of assistant secretary of the department , Dr Clegg broke down during a Senate Estimates hearing in May this year as she described vessel conditions that led to the deaths of 2400 sheep on the Awassi Express in 2017.

“That a department currently under review could allow 58,000 sheep to be exported on the basis of a legally-flawed export permit decision adds to their litany of regulatory failures.”

Animals Australia said it was set to argue a number of significant legal grounds in the case, including that the required animal welfare standards cannot be met during live sheep voyages to the Middle East in the northern summer months, and thus, that this export permit should not have been granted.

“As such, we will not hesitate to challenge other department decisions that we believe are not compliant with the regulatory regime. ”

The conduct and the ability of the Department of Agriculture to regulate the live trade has been under intense scrutiny since evidence of systemic breaches of regulations, and the routine suffering of sheep at sea, were exposed.

“The department has the responsibility of making regulatory decisions that affect the lives and welfare of hundreds of thousands of animals.

“It is now clearer than ever that this role must be removed from them,” Ms Hamade said.

‘Technical deficiency’ has no bearing on other approvals – DAWR

A DAWR spokesperson said the department maintains that the decision maker properly considered the health and welfare of the livestock in granting the subject permit.

“The court has not made any rulings on that aspect of Animals Australia’s case.

“A technical deficiency in the delegation of powers to the decision-maker was identified, and the parties agreed that the decisions made in relation to the export permit were invalid on that basis alone,” the spokesperson said.

“The technical issue was resolved immediately.

“There are no practical implications for the shipment in question,” the spokesperson said.

“This was a one-off — there are no questions around the approvals of any previous voyages.

“This had no bearing on the decision to suspend the licence of a second live export company.”