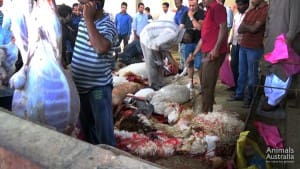 LIVE export opponent Animals Australia believes it has collected sufficient evidence for the Department of Agriculture to suspend the licences of sheep exporters involved with the latest ESCAS breaches in the Middle East.

Animals Australia said three exporters – Livestock Shipping Services, Emanuels and Wellard – were exporting to the Middle East at the time of the breaches. Wellard recently called for tougher penalties and for offending exporters to have their export licence suspended.

“We haven’t named ‘offending’ exporters because frankly, we don’t know who is responsible for what breaches,” Animals Australia spokeswoman Jodie Jankevics.

“That’s the Department of Agriculture’s job to figure out and they have all the evidence to enable them to do so.” 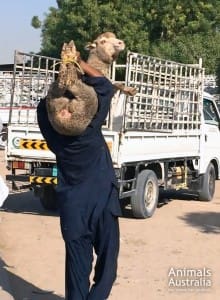 But she said “extensive evidence” provided to the department was sufficient for an exporter(s) licence to be suspended by the Australian Government.

The latest ESCAS breaches and footage of suffering sheep featured in the ABC’s 7.30 Report last night have also prompted the RSPCA to demand urgent regulatory action from the Federal Government.

Animals Australia said if the Australian government was ensuring its live export regulations were being properly enforced then re-offending export companies would by now be facing criminal charges.

Instead, new investigations throughout the Middle East have once again revealed widespread and deliberate breaches of Australian export laws, resulting in horrific cruelty to thousands of Australian animals, the animal rights body said.

Animals Australia’s chief investigator, Lyn White, said some exporters believe Australia’s Minister for Agriculture Barnaby Joyce has their backs no matter what they do and there’s no doubt that this has contributed to their unwillingness to abide by the rules.

“Inconceivably, rather than focussing on addressing breaches of regulations, exporters were allowed to send three more shiploads of sheep to Kuwait and those hundreds turned to thousands of animals brutalised during the Festival of Sacrifice.”

Animals Australia said in Kuwait, Oman and the UAE, its investigators witnessed terrified sheep being dragged through the streets and stuffed in car boots in suffocating 48°C heat. Sheep were also illegally sold for backyard slaughter direct from the industry’s ‘approved’ abattoirs — in blatant contravention of Australian export laws, the body claimed.

“I understand Minister Joyce will defend this industry until his dying day.

“All we are asking is that he gives his department the green light to take strong action against offending exporters,” Ms White said.

“Until the Department of Agriculture uses its power to suspend export licences and prosecute companies for recurring breaches, then cruelty will continue.”

Ms White said it was unprecedented for a major export company to break ranks and call for licence suspensions for offending.

“It speaks to how dire this situation has become, that Wellard feels that they have no choice but to speak out.”

RSPCA chief science and strategy officer Dr Bidda Jones said despite warnings from Animals Australia investigators, and the Australian Live Exporters Council acknowledging that supply chains in the Middle East could not be secured, the federal Government has once again allowed Australian animals to be exported to markets where cruelty is inevitable.

“Every year for over a decade, there has been appallingly brutal treatment of Australian animals across the Middle East during the Eid.

“This government’s continued lack of effective regulatory action has resulted in the suffering of thousands more of our animals,” she said.

“The consequences of letting offenders get off scot-free are now abundantly clear, with several thousand sheep across three countries sold outside supply chains to endure the pain and distress of street slaughter.

“There are two obvious actions the government should have taken to prevent this: imposed strong penalties on exporter companies breaking the rules, and introduced a full traceability system for all exported sheep,” Dr Jones said.

“Any exporter caught with animals outside the system should have their licence immediately suspended, and all sheep must be electronically tagged so that they can be tracked through the system.”

A spokesperson for Mr Joyce said ESCAS has continued to drive welfare improvements during Eid celebrations this year.

“We are aware of new allegations being made by Animals Australia regarding ESCAS breaches in the Middle East during recent Eid celebrations,” the spokesperson said.

“The Department of Agriculture and Water Resources will thoroughly investigate these breaches – no shortcuts are taken as is the case with all such allegations.”