A LEGO woolshed has put Tahara’s Angus Dohle on the path to recognition as a designer, but he needs the help of every Sheep Central reader and their friends.

After about two years of work, Angus, 15, has submitted his working LEGO woolshed — complete with shearers, sheep, wool, woolpress and a raised board — to the LEGO Ideas program.

LEGO Ideas invites LEGO fans to submit new, original, and creative ideas in the form of a “product idea” that others vote on and are then considered as potential new brick-based LEGO playsets.

Angus said his woolshed took time to build due to the need to find the right bricks, order it, wait till they arrive and then continue the next stage of his project.

“This is the first time I have designed and built something myself.” 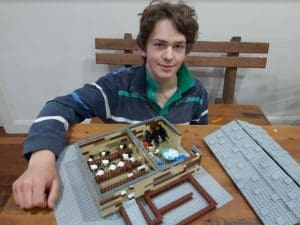 Angus Dohle with his LEGO woolshed and yards.

If his wool shed idea gets 10,000 supporters, Angus gains recognition as a Lego Fan Designer and if the company chooses to make his design into a product – the teenager gets 1 percent of the total net sales of the end-product, plus 10 complimentary sets.

Angus said his parents, composite sheep farmers Sam and Julie Dohle, have also helped out along the way. They gave him his first LEGO set as a 4-5 year-old.

To build his two-stand woolshed Angus had to use only existing LEGO bricks, so to find appropriate pieces took some time and ingenuity.

“I’ve had to improvise a few and part of the final design process, if the idea is approved, is going through the set refining everything with an official LEGO designer and if there are any bits that need to be made to make a set easier to build, they will design something just for that.”

He said the shearing handpieces and the overhead motor were the most difficult pieces to select and create from the available LEGO pieces.

Angus was inspired to build his woolshed model because there are few LEGO sets that are oriented around a farm setting; however, he said it would fit in with other LEGO farm sets. This could also be educational to people who are not from a rural or farm-oriented background, he wrote in his product idea blurb.

Sheep Central readers can register their support for Angus via this link, but Angus said potential supporters of his idea must make a LEGO account to ensure their vote counts.

“You need to make an account before your vote goes toward the tally.”

An Australian Wool Innovation spokesman said AWI fully supports Angus great idea of a LEGO woolshed and is promoting it via its Twitter and Facebook accounts.

“Wouldn’t it be great if this young man’s idea ends up being on sale around the world?

“We also wish him well in the future and look forward to his wider contribution to the wool industry when he gets older, what he has done so far is a great start.”

The Hamilton and Alexandra College student said his future work interest lay in engineering and design. He said his next LEGO creation could be either a set of cattle yards or a rotary dairy.