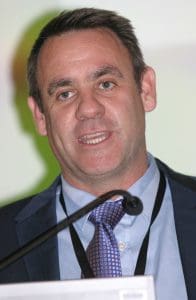 MEAT & Livestock Australia managing director Richard Norton has slated comments from a peak domestic processor and retailer body that the country’s lamb industry was not “overly exposed” on the mulesing issue.

Australian Meat Industry Council chief executive officer Patrick Hutchinson has told Sheep Central that the council did not believe the lamb sector is “overly exposed” to a consumer acceptance risk because of the mulesing of lambs and ewes.

Encouraged by MLA and after the recent release of AuctionsPlus data indicating the extent of mulesing in the prime lamb sector, the Sheepmeat Council of Australia last week said prime lambs should not be mulesed and producers are encouraged to introduce genetics and management changes to enable prime lamb mothers not to be mulesed.

When asked whether AMIC supported the SCA position, Mr Hutchinson said AMIC will consider a formal position on mulesing at upcoming member meetings.

“We don’t believe the lamb sector is overly exposed in this area.

“Where there are specific requirements from customers, whether that be domestic or international, for non-mulesed lambs, then processors, and their producer suppliers, will have procedures in place to meet those requirements,” he said.

“The processor sector is aware that consumer requirements change over time, but AMIC feels that consumers generally understand that the welfare of animals is of great importance to producers and processors.”

He said AMIC would be supportive of any solution that allows for the management of major welfare issues on farm to ensure the wellbeing of livestock.

“AMIC always encourages sheep producers to keep the welfare of the animals in their care front of mind at all times.

“In some instances, this might include mulesing to prevent future incidences of flystrike,” he said.

AMIC not in favour of red tape

On the issue of regulating pain relief or mulesing of lambs and sheep, Mr Hutchinson said AMIC was never in favour of extra red tape upon the supply chain, especially when industry can manage the outcome to the satisfaction of the consumer, when required.

“AMIC is of the opinion that the sheep production industry – both sheep meat and wool – is best placed to manage the issue of mulesing moving forward, whether that is in encouraging changes in genetics for breeding of fly strike resistance, uptake of pain relief, or other options.”

He said some processors may choose to make non-mulesing or mulesing with pain relief a quality assurance or animal welfare requirement to maximise consumer acceptance.

“Commercial realities may mean some processors make a choice to purchase from only certain types of production systems over time, if required.

“As always processors would work with producers in the development of such programs.”

Mr Hutchinson said AMIC is supportive of MLA programs to improve animal welfare outcomes and in areas that make management practices easier and more productive or economic for the whole supply chain.

AMIC comments naive and not in industry interests – Norton

However, Mr Norton said Mr Hutchinson’s comments on the industry risk posed by mulesing were at best naïve.

“To think that the prime lamb industry is not over-exposed to mulesing is at best naïve and not acting in the interests of prime lambs producers in Australia.

“It’s naïve to think it is not an issue.”

MLA managing director Richard Norton Mr Norton has recently been criticised for urging the sheep meat industry to set a consumer strategy around mulesing and pain relief use, but this week reiterated that MLA has never said it wanted mulesing banned.

“We have said the consumer is king and the prime lamb industry must realise that it is in the food sector, not the fibre sector.”

In MLA-funded surveys, the number of Australian consumers limiting lamb consumption due to animal welfare concerns has risen from 2 percent in 2012 to 6pc in 2017.

This is a concern to lamb producers and the MLA, because if the number of consumers limiting lamb consumption over animal welfare rose above 10pc in the next five years, it would mean MLA and the industry has not met its consumer acceptance key performance indicator in the Meat Industry Strategic Plan 2015-2020.

The MLA leader has previously told Sheep Central that his primary key performance indicator was that he never lose more than 10 percent of consumer support for the Australian red meat sector. This figure is currently around 7pc.

“Consumer interest in animal welfare is growing across all key red meat markets, while retailers are increasingly concerned about shopper and investor scrutiny of the products they source.

“This is translating to action,” Mr Norton said.

“To discount or fail to communicate these global macro trends – or take no action to protect the farmgate income of prime lamb producers – would represent a dereliction of MLA’s mission and strategic imperative.

Mr Norton said he has always conveyed the position of the food consumer in the context of animal welfare issues such as mulesing.

“MLA collects a levy from the prime lamb industry, which is a food industry where the consumer is king.

“I have never said that mulesing should be banned, I have only ever said that a consumer if they saw mulesing in the prime lamb industry, it would have a dramatic impact on farm gate price,” he said.

“What a lot of people don’t understand is that the prime lamb is in the food industry, not the fibre industry.”

Mr Norton said MLA had also never said it would do any research on mulesing, “because it is not required in the prime lamb industry.”

“This is what a lot of people don’t understand, we have always portrayed the perceptions of the consumer and the risks in putting consumers off a product.

“They will change a market overnight and that’s consistently what I’ve said,” he said.

“For anyone to say that MLA wants to ban mulesing is just disingenuous.”

Mr Norton said his comments regarding mulesing have been made within MLA’s responsibilities to the prime lamb industry and what consumers, domestically and globally, are telling MLA and the industry regarding their expectations of sustainable food production.

“This is consistent with a key plank of the Sheep Industry Strategic Plan (SISP) 2020, which is to monitor and respond to community perceptions and concerns about practices in the sheep industry.”

Consumer perception data is not specific …. yet

“I think the signals that we will receive will be from the markets.”

She said some markets had indicated to the SCA that animal welfare standards were important to them.

“In particular the EU; they often specify that welfare standards are important.

“So I think the real driver will come from international markets, but we may possibly see the consumer start to consider animal welfare and break it down into other categories, but at this stage we don’t.”

The SCA has asked MLA to keep it informed about consumer and market perceptions in regard to animal welfare categories and mulesing. The council is also working with MLA to understand the extent of mulesing within the Australian sheep meat industry, and consumer and customer insights and preferences, to inform a policy position on mulesing.

“We’re supporting of looking at the (animal welfare) risk and how we can mitigate the risk in the sheep industry, so on that basis we support anything that looks into addressing those risks.”

Current SCA policy is that sheep meat producers phase out mulesing as soon as practical and to promote best practice, including the use of pain relief for all invasive procedures.

Dr Giles said mulesing is a recognised practice that is carried out in the sheep industry, to control breech strike and has proved effective in improving long-term welfare outcomes of sheep retained for breeding and wool production.

“However, as an industry we also understand and recognise our responsibilities to consumers and the broader community who have high expectations around animal welfare and a growing interest in the provenance of the food they purchase.

“We believe that in prime lamb production systems, prime lambs should not be mulesed and producers are encouraged to introduce genetics and management changes to enable prime lamb mothers not to be mulesed.”

She said that SCA is aware that mulesing is done early, as required by the Australian Animal Welfare Standards for sheep, which meant that at the time of mulesing, lambs maybe targeted for wool production, but due to season or market changes there is a change in destination.