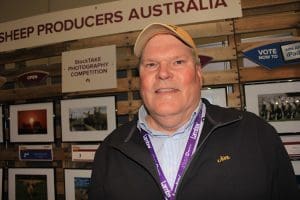 ADVENTUROUS Millennials and ‘infrequent lamb users’ have been identified as key American lamb lovers, a visiting US industry leader said at Lambex 2018 this week.

The Ohio rancher was on his first trip to Australia and said he raises Shropshire sheep, selling rams to other producers and lambs to a local independent grocery store and direct to ethnic communities.

Mr Percival said about 52-53 percent of the lamb consumed in the United States is Australian.

“And one of the things I believe and most of the people in America understand I that even if Australia turned the spigot off tomorrow, there is no way that we could provide enough lamb to meet the consumer demand in the US.

“But one of the things that we want to do is to establish balance with the Australian and the domestic lamb, so that we all win,” he said.

“We just finished our five-year plan and we have the adventurous eating campaign.

“Through our research we have been able to establish that the Millennials (people born from 1981-1996) truly love our product and they are adventurous eaters.

“So what we are trying to do is through blogs, through electronic media, is be able to target that audience — because that is how they get all their information – to increase demand,” he said.

“We’ve been fairly lucky in the last few years, demand has increased, but our goal is to increase 10 percent a year over the next five years.”

Mr Percival said Americans just eat on average just under one pound or about 1000 grams per year.

“So if we can increase that to 1.1 pounds in the next five years that will make that pie bigger for everybody.

“The Millennials are a very large key to our increase and the other key are the people we call infrequent lamb users.

“A lot of the things they’ve talked about at this conference are the same things we are facing in the US,” Mr Percival said.

“Because I am from a huge cropping area, so we have to balance cropping versus the livestock, so there have been some things I can take home on that too.”