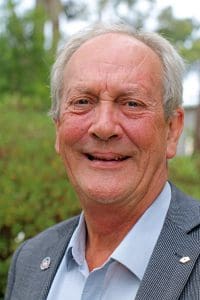 The United States is rated as Australia’s most valuable sheep meat export destination, yet it has an average per capita consumption of lamb of just 400 grams – or one meal a year. The US imported 150,000 tonnes of sheep meat a year and produced 50,000 tonnes domestically.

“The Chinese clearly are prepared to pay for quality, perhaps not every day but for a special occasion,’’ Prof Pethick said.

In the study, US, Chinese and Australian consumers all responded positively to intramuscular fat.

Prof Pethick, of Western Australia, was a guest speaker at the Australian White Suffolk Association conference at Creswick, Vic, on February 12-13.

A recent hot pot experiment in China used lamb and yearling forequarter and shoulders sliced to 1.6mm thick and cooked in unflavoured boiling water for 90 seconds.

“There was still a statistical response to intramuscular fat in lamb cut to 1.6mm and boiled – there was a negative relationship with lean meat yield or muscularity,’’ Prof Pethick said.

“These traits even come through in such obscure cooking methods.’’

He said a recent study evaluated grass and grain-fed lamb, and young (five months) versus old lamb (12 months) in the US market.

“It was found there was no effect between grass and grain fed lamb at 21-45 days post slaughter, in fact, ageing improved the product out to 21 days, and after that, it held.’’

Sheep Producers Australia chairman Allan Piggott said the future was positive with global sheep meat consumption forecast to increase by 10 percent in the next seven years.

Mr Piggott said the big challenge would be the forecast fall in US and Mexican consumption due to animal welfare and environmental concerns, and non-tariff barriers.

He said Sheep Producers Australia aimed to facilitate increased consumption in the US, Australia’s most valuable export market.

“The average American consumes 400 grams of sheep meat, or one meal, per year, with the majority never tasting lamb,’’ he said.

“If we can increase consumption by a small amount, no one would keep up with demand.’’

Mr Piggott said Australian and New Zealand lamb had a high reputation with US consumers at retail level.

“Australian lamb is priced about two-thirds of the domestic US product on the supermarket shelf,’’ he said.

“This comes back to cost of production as the US feed, energy and processing costs are less than ours.

“But, on the west coast, ewes are lambed on the flats and then grazed in the Rocky Mountains under the guardian of a shepherd to protect against predators.

“Further north, all sheep are shedded during the winter months, so there are legitimate reasons why the US cost of production is higher.

“We already have a strong free trade agreement with the US but the domestic ranchers are a powerful lobby group.

“Those ranchers are keen to reduce the Australian and New Zealand product on the supermarket shelves.

“The US is a valuable and wealthy market, and when they do get a taste for Australian lamb, they take it on board.’’