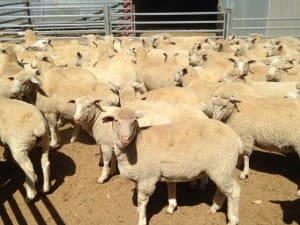 All classes of lambs lifted in price at saleyards last week, with the few Friday sales also reaping the benefit of pre-Easter buying by processors.

Eastern states processors have only two days of saleyard sales to buy from this week, with the only centres operating being Dubbo, Tamworth and Forbes in NSW; Bendigo and Ballarat in Victoria, and; Naracoorte and Dublin in SA.

Only Katanning in WA will sell sheep and lambs on Wednesday, with Muchea also selling as usual on Tuesday.

Saleyard sales then don’t start again until April 7 next week at the usual venues in SA, NSW, Victoria and WA.

The mutton ESDI closed firm on Friday on 339c/kg, after a 20-cent weekly lift, and the national mutton indicator was at 338c/kg, down one cent.

Supplies possibly not shortening just yet

“So I don’t think there are any indications just yet that there is a tightening of supply, though it is likely to happen later on.”

Mr Thomas said there is a break in the markets over Easter and traditionally there is volatility in the market at this time of the year due to shorter kill weeks and fewer saleyard sales.

“It is quite common for the week before and after a long weekend for there to be a fair bit of volatility in the market.”

She said the benefits of utilising AuctionsPlus were highlighted neatly in the prime lamb sale.

“While only a small offering of 726 lambs out of NSW, six processors from three states viewed the sale; one vendor expecting only local competition sold his lambs to a Victorian buyer; and the vendor’s ability to be a price maker was exhibited by purchasers meeting reserve prices following the auction.”

“We were very pleased with the buyer interest and the prices achieved for the lambs offered in our first prime lamb sale.”

Ms Adams said delivery periods provided flexibility for buyers to allow them to fit in with kill space schedules, with pick up dates through to the week following Easter. Of the 15 registered bidders logged in, six were processors.

“Several other processors expressed interest in the sale and viewed the catalogue, however the lambs offered either did not suit their specifications or they did not have kill space available in the delivery periods nominated.”

Ms Adams said 226 24.2kg cwt lambs at Coonamble sold for 508c/kg on farm including skin, to a processor in Victoria with a freight estimate of 38c/kg.

“The vendor was expecting his lambs to sell to a local processor, and was pleasantly surprised at receiving competition from the buyer in Victoria whom he had not sold to before.”

She said 200 23.8kg cwt lambs at Cowra sold for 550c/kg on farm including skin, to a processor in NSW. AuctionsPlus’ next sale will be on Friday April 10 at 8am (NSW time) with sales to run fortnightly.

Ms Adams said more joined and scanned ewes are hitting the online marketplace, particularly out of the south. Young Merino ewes joined to Merinos made $89-$122 last week, while those scanned to terminal sires sold from $113-$135 for rising two-year-olds out of western Victoria. Aged ewes to drop a crossbred lamb sold from $64-$101.50.

The crossbred ewes offered last week on AuctionsPlus were primarily White Suffolk/Merinos, with joined ewes selling for $127.50-$147. Some first cross ewe lambs out of Tasmania sold for $150. In QLD, White Dorper ewes out of Blackall sold for $95-$102, well above their reserve price.

Ms Adams said Merino wether lamb prices ranged from $30-$74 averaging $54, with the top price being for Bundilla blood lambs out of Young just a month off shears and weighing 38kg live. Lambs estimated to dress at 28kg at Cowra sold for 550c/kg cwt or $156. In Tasmania some 21kg cwt lambs made 512c, all including skin value. Processors were also chasing mutton with prices ranging from 250-336c/kg cwt including skin, Ms Adams said.

The NLRS said lamb quality varied, with some well-finished trade and heavy lambs, and plainer lines. There were more trade lambs compared to previous sales, a reasonable supply of heavy weights and a limited number of store lambs. All the buyers were operating and competition was solid, resulting in a firm to dearer market.

There was a better quality selection of lambs compared to last week. The usual buyers operated in a dearer market.

The best pens of slaughter lambs sold $2-$9 dearer. The market reached a top of $154 twice for export lambs estimated to have a carcass weight of about 28kg. Apart from a few lead pens in each agent’s draft, most of the lambs on offer were plainer trade and lightweight types. The general run of trade lambs sold from $96-$110, while most lightweight pens made from $70-$90. There was limited restocker interest at up to $108.50, but most sales back to the paddock were smaller and plainer lambs sold from $53-$80. About a dozen pens of well-finished heavy lambs, 24-26kg cwt, sold from $125-$145. A limited offering of heavier export lambs sold for up to $154. In carcase terms the better quality slaughter lambs ranged from about 510-540c/kg, to average around 530c/kg.

The sheep market also rebounded from last week’s lower levels. The better quality yarding of sheep included some better lines of first-cross ewes which sold from $85-$118.