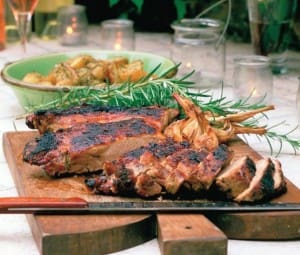 A NEW survey by Aldi confirms Australia is a nation of meat lovers, spending a huge $378 million a week on meat to cook at home.

The supermarket chain commissioned a Galaxy Research poll of a nationally representative sample of 1001 Australian grocery buyers in June 2016.

The survey results showed that the average Aussie household eats 4.5 meat meals at home per week. Of all the meats on offer, 47 percent of survey respondents ranked chicken as their favourite, while 31pc preferred beef, 14pc lamb and 8pc pork.

New South Wales shoppers lead in their love for lamb (17pc) and Western Australians have a penchant for pork (13pc). Tasmanians are the biggest lovers of beef, with 42pc of respondents naming it their favourite protein.

The survey also revealed the resurgent role of the slow cooker, with 50pc of respondents saying they were just as likely to cook meat in this appliance as they were on their beloved BBQ (54pc).

With the price of meat rising, value for money has become top of mind for shoppers. Two thirds (65pc) of respondents said they buy their meat from where they think they can get the best quality for the best price.

The average household spends $46 a week on meat, but one in five would spend more if they could afford it. Other reasons to buy more meat included finding cheaper cuts (29pc) and easy to follow recipes (28pc), having more time to cook (27pc) and convenient package sizes (24pc).

“The Aldi Meat Index shows Australians are looking for better value, wanting to squeeze more meat into their weekly grocery budget without having to compromise on quality,” an Aldi Australia spokesperson said.

“They’re looking for high-quality, affordable and convenient products that are both easy to cook through the week and something special to celebrate with friends and family.”

The ACT has been found to be the meatiest state, with 70pc saying they love eating meat and 51pc eating five or more meat meals each week. Nine out of 10 (92pc) shoppers nationally say buying Australian grown meat is important to them.

When it comes to experimenting in the kitchen, young people are most likely to stick to their weekly regulars (42pc of 18-34 year olds). Older Australians aged 50-64 were more than twice as likely to experiment as much as they can (19pc compared to the national average of 12pc).