Alarming statistics put farming at the top of the danger list 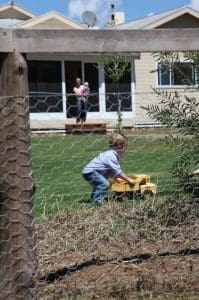 Child safety on farms depends on active supervision and the provision of a safe place to play.

THE statistics tell a disturbing story – farms remain among the most dangerous workplaces in Australia.

In 2017, there were 68 on-farm fatalities, nine of those involving a child aged under 15 years.

In addition, another 179 non-fatal on-farm injuries were recorded.

Tractors and quads bikes were the leading causes of on-farm fatalities.  Between 2001 and 2017, there were over 247 quad bike deaths. In 2017 alone, there were 12 fatal incidents involving quad bikes with 11 occurring on-farm.

Farmsafe Australia chairman, Charles Armstrong, said although there had been an overall reduction of around 60 per cent in the number of farm injuries and deaths over the past two decades, there was still much that needed to be done to reduce the incidence.

As part of ongoing efforts to raise awareness of farm safety issues in rural communities across Australia, National Farm Safety Week kicks off today under the theme “Innovative, Safe and Healthy”.

During the week, Mr Armstrong said Farmsafe Australia would be focusing on innovative ideas and practices to promote a safety culture on Australian farms, including the use of newfound technologies.

“In a time of technological transformation in workplaces, farming too is undergoing a period of exciting technological change as we move into the digital landscape.

“With this comes a remarkable opportunity for innovative solutions and ideas around farm safety,” he said.

“From digitised safety inductions using QR codes, to design improvements that make farm vehicles safer to operate, through to Personal Locator Beacons that sends a safety alert where something goes wrong in areas with no mobile reception, the possibilities are endless.

“Innovation can complement practical steps for farm safety,” he said.

‘When you are out on the farm, it is important to let people know where you are going and what time you expect to be back so that someone can come looking for you if you are injured.

“Devices that automate safety alerts when something goes wrong, such as a quad bike rollover, can be the difference between help arriving on time, or too late.”

“Farm Safety Week is an opportunity to recognise and celebrate some of these achievements, while also reinforcing key safety messages.

“It’s about making sure that everyone involved in the farm gets home safe and sound at the end of each working day,” he said.

“That’s a good thing not just for our families but also our business and communities.” 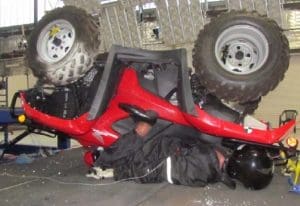 Mr Armstrong said over half the 247 quad bike deaths from 2001 to 2007 resulted from machines rolling over, with riders being asphyxiated or crushed to death.

“Farmsafe Australia has welcomed the recent ACCC review into quad bike safety and supports Option 5 of the draft recommendations which will, among other things, introduce a safety star rating system, mandate CPD’s on new bikes sold in Australia and introduce minimum test requirements for static stability, mechanical suspension and dynamic handling,” he said.

“These measures will have a real impact on the safe design of quad bikes.”

Mr Armstrong said quad bikes had an illusion of stability and people often thought that four wheels were safer than two wheels, but that wasn’t the case.

“Because of their instability, quads are often not the best or safest vehicle for the jobs that need to be undertaken on the farm,” he said.

“In many cases a small ute, side-by-side vehicle or two-wheel motorbike will be a better alternative and while these carry their own risks, we know they are lower than that of quads.

“In fact, many farmers have moved away from using quads at all because the risk of rollover is too high,” Mr Armstrong said.

Mr Armstrong said if using a quad, a key to reducing the number of deaths from rollovers was fitting a suitably tested crush protection device (CPD).

“The available evidence strongly supports the use of these devices. These devices will limit people being crushed by quads when they do rollover,” he said.

Victoria and NSW now offer a rebate program to encourage the fitting of CPDs to bikes currently in use, which are lightweight, can be simply fitted to most bikes and don’t interfere with normal riding practices.

Children are at risk on farms

Mr Armstrong said farmers needed to take steps to protect children on farms by creating safe areas for them to play and keeping them away from hazardous pursuits.

Quad bikes were the leading cause of child fatalities on farms last year, while farm infrastructure such as water tanks and farm vehicles such as trucks and tractors were also causes.

“We are pleading with parents to ensure that children under 16 years don’t ride or be carried as passengers on quads of any size,” he said.

“The two things you can do straight away for young children that may live or visit your farm is to make sure you have a secure safe play area and not to allow children on quads.

“This may not make you popular but nobody likes to see children in these incidents, so let’s fix these issues for everyone,” Mr Armstrong said. 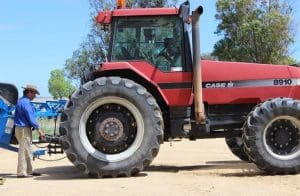 Farmers should ensure machinery is guarded properly, including PTO guards on tractors.

Meanwhile, Safe Ag Systems will use National Farm Safety Week to focus on the positive aspects of farm safety to promote actions farmers can take to improve their own safety culture.

During the week Safe Ag Systems will be publishing case studies of everyday farm safety heroes designed to encourage farmers to view things on their own farms from a slightly different perspective.

These will be emailed directly to clients but will also feature on a dedicated section of the Safe Ag Systems website, as well as on its Facebook, Twitter and LinkedIn channels, which will host a suite of handy hints and fact sheets in coming months.

Practical steps that farmers can take to improve safety include: