HERE’S the first of two quick quiz questions: Can you guess, within the nearest 10,000 tonnes, how much Australian exported red meat has left these shores this year as airfreight, rather than sea-freight?

Collect your prize at the door if you said 50,000 tonnes, or thereabouts. According to DAFF data, the actual figure, for the calendar year to the end of August, is a surprising 53,035 tonnes.

That represents close to five percent of all meat and offal exports leaving Australia this year, and could easily surpass 75,000t for the full 12 months.

Why would anybody ship lamb or beef by airfreight, when the equivalent sea-freight voyage is not only considerably cheaper, but also provides all-important ‘ageing time’ en-route, I hear you ask? Keep in mind that chilled red meat is perhaps unique among perishable food items, in that its eating performance is in fact enhanced by the time spent in a typical 3-4 week sea voyage in a chilled container to a far-flung destination.

The answers are somewhat complex, and are linked to cultural traditions, in-country subsidies, trade access issues and other factors in certain parts of the world.

Here’s a couple more interesting airfreight trade statistics that might help you with your second quiz question.

Lamb is easily the dominant meat protein responsible for airfreight trade out of Australia.

Here’s your second quiz question for the day: Can you name the regional destination that takes the greatest volume of airfreighted red meat out of Australia?

Abundant kudos to those of you who picked the Middle East.

For the calendar year to the end of August, the collective nations in the Middle East region have taken more than 31,000 tonnes of Australian red meat by air, or close to 59pc of the total, according to DAFF data.

The ‘other Asia’ category (de facto for China, with a little support from Indonesia) was next, at 15,000t, with other destinations much less significant – Western Europe being third at 1500t, and Korea fourth, at 1000t.

In the case of the Middle East airfreight trade, lamb is dominant, accounting for 27,000t, or 87pc of its total airfreight meat imports from Australia. Add mutton to that, and the figure rises to 92pc.

In practical terms, it means there are about 10,000 lamb and mutton carcases airfreighted into the region each day. And airfreight lamb/mutton shipments continue to rise, as a proportion of total trade to the region, as this graph shows. 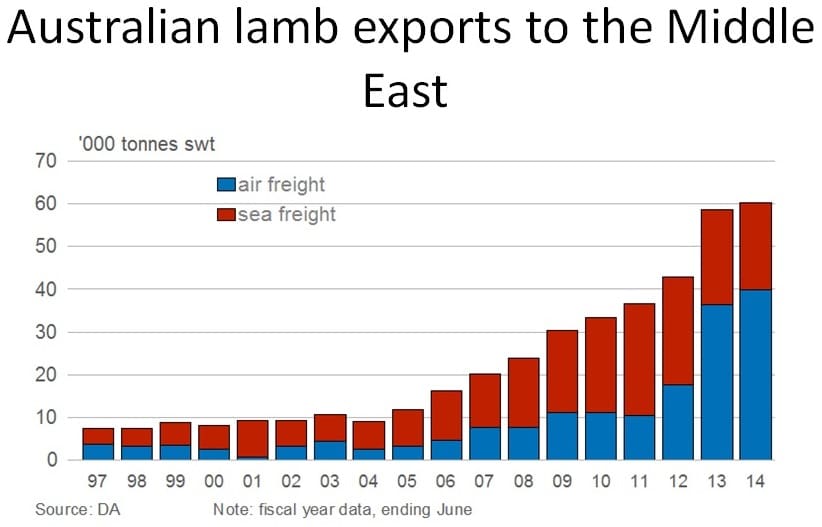 So why is our airfreight trade into the Middle East – particularly in sheepmeat – so strong?

Our research has provided several reasons:

Melbourne and Perth are the two main Australian departure points for airfreight sheepmeat into the region, with most of the product destined for Bahrain, Qatar, Kuwait, UAE, Jordan and Saudi.

“There are now around 130 flights per week from Australia to the region, scheduled by the main freight carriers Emirates, Qantas, Etihad and Qatar airlines,” he said.

The carcase trade had also increased as the live sheep trade had reduced.

“The region is set up with markets and supermarkets with well-trained butchers, whose main task is to break down carcases for the local consumers’ cooking requirements.”

The local dish throughout the region is Biryani (slow-cooked lamb, mutton or goat with vegetables and rice all cooked together in one pot). Each country has its own subtle variations of the dish.

MLA had been working hard to train local consumers on alternative cooking methods to Biryani, such as roasting and grilling which Australian lamb products are ideal for, due to the higher fat content.

Among the region’s more sophisticated retailers, Australian chilled lamb and beef cuts also have a strong and growing market share, with the fast-growing, ethnically-diverse population and burgeoning food service trade.