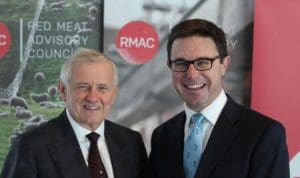 AUSTRALIA’S Minister for Agriculture David Littleproud has refused to meet with a Western Australian exporter seeking clarification on the pathway forward for live sheep exports to the Middle East.

News of the refusal over recent weeks has come as the leaders of the WA farm bodies – WA Farmers and the Pastoralists and Graziers’ Association of WA – urge the minister to meet with farmers and the three licensed WA sheep exporters remaining; Wellards, Livestock Shipping Services and Harmony Agriculture and Food Pty Ltd.

Mr Sealy told Sheep Central LSS was told by Mr Littleproud’s chief of staff Alison Penfold that its representatives could meet with her, but not with the minister. Ms Penfold was formerly the chief executive officer of the Australian Livestock Exporters’ Council and is advising the minister on live export matters.

The company is still “well and truly” unclear about the pathway forward for live sheep exporters, he said.

Australia’s largest live sheep exporter Emanuel Exports and its subsidiary EMS Rural Exports have had their licences suspended by the Department of Agriculture and Water Resources, leaving about 60,000 sheep in a feedlot near Perth. Emanuel and the sheep’s intended importer Kuwait Livestock Transport and Trading are still trying to organise the export of about 45,000 of the sheep to the Middle East.

A Wellard spokesman said the the company always welcomed the opportunity to meet Mr Littleproud whenever he comes to WA or its representatives were in Canberra, but had not sought a personal meeting.

“Nothing beats a face-to-face meeting to discuss current industry issues.

Harmony managing director Steve Meerwald said he had no comment to make at this stage.

PGA president Tony Seabrook has told Sheep Central the WA exporters “feel shut out” and he has urged Mr Littleproud to meet with them to give some clear direction, “but not this ‘have a go and see what happens’.”

WA Farmers president Tony York said Mr Littleproud’s office has said the minister wanted to come to Western Australia “as soon as he possibly can” to meet with WA farmers and other industry people.

“He has also being encouraged (by WA Farmers) to meet with the exporters and I’m assured that is not including Emanuel, but with the others.

“Through his office, the indications are that he is seriously considering that, so we are hopeful that he will take that up.”

Mr York said WA Farmers wanted to make sure Mr Littleproud fully understood the state’s issue, including the small backlog of sheep that should have been shipped in the last six weeks.

“So there are real on-ground issues that are needing to be managed, which he can’t deal with directly, but he needs to be aware of that.

“The farmers and the supply chain in WA, they’re just looking for a bit of a pathway on how they could plan and manage their own issues going forward, with the McCarthy summer trade restrictions and when we can go back to a normal stocking densities, probably in November,” he said.

“When can shippers start planning and get an indication that trade will return to some sort of normality after the summer period?

Despite questions from Sheep Central, Mr Littleproud this week has not stated whether he is prepared to meet with the three WA exporters. But in a statement today, his office said live exporters must show their Middle East customers and Australia, the live sheep trade can be done properly.

The minister’s office said Mr Littleproud recently travelled to the United Arab Emirates, Qatar, Kuwait and last week to Israel, to support the live export industry. The statement said: “The government is doing all it can, but that effort will come to nothing if no exporter steps up and takes the sheep which are currently in Perth to the Middle East, where customers need to know Australia can supply sheep through the northern summer.”

Mr Littleproud said ALEC has for years said its members are the world leaders in live export “and now is their chance to prove it.”

“ALEC members need to show us they haven’t been taking us for mugs the whole time,” he said.

“The current situation is the result of the alleged actions of an exporter,” Mr Littleproud said.

“Exporters have made millions of dollars off sheep farmers.

“It’s time for an exporter to step up; farmers should not take the fall.”

Mr Littleproud said “an exporter needs to take these sheep to the Middle East.

“Exporters who value the trade know we need to show Qatar, Kuwait and the UAE we can give them supply through their summer.

“We also need to show Australians the trade can be done properly through the Middle Eastern summer and rebuild public support for this industry,” he said.

Mr Littleproud said when an exporter is suspended, it is not the fault of the government, the regulator, nor of farmers.

“Letting exporters do the wrong thing without serious consequences would eventually see the trade shut down forever.

“Suggestions the independent regulator should look the other way to ignore allegedly dodgy behaviour are dangerous,” he said.

“Suggestions I should hold talks with suspended exporters to broker a deal with them are equally dangerous.”

Mr Littleproud travelled to Israel last week to lobby for live animals from Australia to continue. The Israeli Parliament will soon consider a move to cease the trade.

“The live trade can be done by the right people, the right way,” he said.

“The Australian Government has long been serious about animal welfare.

“Those changes include reduced stocking densities and independent observers on every boat supplying the truth of what happens on those voyages, and proof of it.

“The live sheep trade is important to our farmers, particularly our West Australian farmers,” he said.

“It was important I make the trip here and represent their interests as well as the interests of animal welfare.”

Sheep Central has sought a response from ALEC to Mr Littleproud’s latest comments.