After 11 years Slammin’ Sam Kekovich is still wedded to lamb 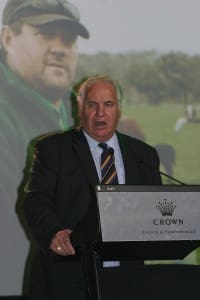 Sam Kekovich fires up for lamb.

And although plans for its next Australia Day Lamb campaign will remain a tightly held secret until January 2016, MLA said Mr Kekovich is an important lamb and sheepmeat industry spokesperson.

He is contracted with MLA until June 2017 and will continue to play a role in the Australia Day lamb campaign, MLA said.

Sam’s role in lamb promotions was downplayed recently with the late Richie Benaud doing the inviting in an ad that won the prestigious 2015 Mumbrella TV Ad of the Year, was highly commended in the Ad Campaign of the Year Award and had success at the 2015 Australian Creative Excellence Showcase (ACES) Awards that recognise outstanding creativity in screen advertising.

At the recent JBS Great Southern producer forum in Melbourne, Kekovich said despite the inevitable media reports that the Lamb-assador might be getting the chop, after 11 years on the job, he was not tired of promoting lamb.

“On the contrary I love the product, even though last year was a change of direction.

“But I’m sure nobody would like to see me holding up a piece of pork or a piece of chicken, I’m sure the farmers wouldn’t.”

“So I’m a pretty loyal ambassador and I’ve proven that over a long period of time.”

He said his health was outstanding.

“It has been a wonderful marriage for a long period of time,” he said.