GROWTH in the direct-to-processor sale of more Australian lambs has coincided with increased incomes among specialist producers, a slaughter lamb production report released yesterday has indicated.

The report also showed it has paid some producers to specialise in prime lamb production and that the number of lambs being finished on grain has declined.

Report authors Milly Lubulwa and Therese Thompson said in the early 1990s, almost all lambs sold by slaughter lamb producing farms were sold at auction or in the paddock. But in the 10 years to 2013–14, greater focus on production of lambs specifically bred for slaughter and on better finishing of lambs before sale resulted in producers changing their method of sale.

Larger flocks are selling more lambs over the hooks 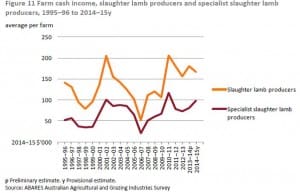 The authors said producers with larger sheep flocks are more likely to sell over the hooks because they can generate larger sale numbers. On average, slaughter lamb producing farms that used the direct selling methods in 2012–13 and 2013–14 had larger flocks. Direct methods of sale such as over the hooks can also reduce carcase damage and loss of meat quality caused by the additional handling involved in saleyards and auction sales, they said.

Farm cash income of specialist slaughter lamb-producing farms, which are more reliant on lamb production than non-specialist farms, is estimated to have increased from an average of $80,900 a farm in 2013–14 to $98,300 a farm in 2014–15. This increase was mainly a result of higher prices for lambs and sheep, the report said. 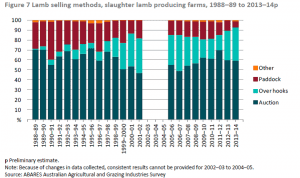 Ms Lubulwa said the direct sale and increased specialist producer income trends were probably linked, but were more due to the higher lamb prices, possibly from marketing to processor quality standards.

“Maybe the prices are stemming from the way they are marketing their product, they are aiming (through quality) to get a higher price.”

For the purpose of this report, broadacre farm businesses are classified as slaughter lamb-producing farms if they sold, on average, more than 200 lambs a financial year over the three years ending 2013–14. Farms are classified as specialist slaughter lamb-producing farms if, on average, more than 20pc of their total income over the three years from 2011–12 to 2013–14 was from the sale of lambs for slaughter.

Non-specialist incomes declined due to crop costs and returns 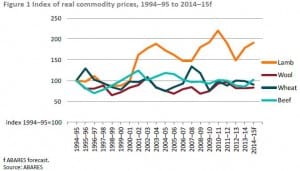 Ms Lubulwa said the average income of non-specialist slaughter lamb-producing farms declined in 2014-15 because most were mixed farms also relying on crop production.

“Although they had high prices for slaughter lamb, their income related to crops went down.

“The main thing that is driving the fall for all producers is the crops.”

The ABARES report found the costs that registered the greatest increases for slaughter lamb producing farms were those related to crop production – especially sprays, fertiliser and depreciation. These crop-related costs, accounted for 32pc of total cash costs in 1995-96, but have risen to 42pc of the total in 2014-15. Crop receipts are estimated to have declined by 13pc, but sheep and lamb receipts to have increased by 5pc.

The report said productivity growth in the sheep industry averaged 0.2pc a year from 1977–78 to 2012–13. This long-run average masks a downward trend to the mid-1990s, followed by a period of strong productivity growth. Productivity gains made since the mid-1990s reflect significant adjustment in the sheep industry as production shifted from wool to sheep meat. Productivity grew by an average of 2.3pc a year from 2000–01 to 2012–13, a higher rate than that achieved by other broadacre industries over the same period, the authors said.

The ABARES report found that farms that grain-finished lambs received a better return for lambs sold and made a higher farm cash income per hectare operated. About 6pc of slaughter lamb producing farms finished a contingent of lambs with grain in the three-year period ending 2013-14.

The majority of these farms were in the eastern states (37pc in NSW, 13pc in Victoria, 24pc in SA and 3pc in Queensland). However the proportion of farms finishing lambs on grain is higher in WA at 8pc, compared to 4pc in the east.

However, available data suggests in general, from 2007–08 to 2013–14, the proportion of specialist and non-specialist farms finishing lambs on grain and the number of grain-finished lambs sold declined up to 2013-14.

The report results suggested no significant difference in the average price for lambs sold for slaughter for lambs grain finished for less than 40 days, or for 40-60 days. The report authors suggest that those producers feeding lambs for less than 60 days were more likely to be using grain to push lambs to a saleable weight, rather than for the purpose of putting on extra finish and weight.

The cash costs of producing lambs is increasing 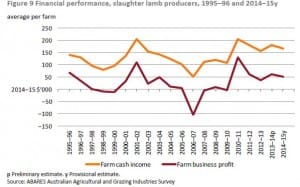 The report authors found that the average total cash cost of slaughter lamb producing farms increased 30pc between 1995-96 and 2014-15, in real terms. This rise, however, is largely in line with the expansion in the average scale of operation over the long-term.