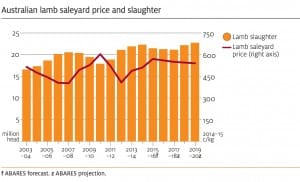 Source: ABARES. Click on chart to view in larger format.

Tight supply versus strong export demand is expected to fuel an expansion of the national sheep flock in the next five years, according to forecasts released by the Australian Bureau of Agriculture and Resource Economics and Sciences today.

ABARES believes the Australian flock will grow from 71 million head this financial year to 76 million head by 2019-20, which, if achieved, would take the flock to its biggest level since 2005.

However, as sheep numbers build up over the medium term and turnoff starts to rise again, saleyard prices are projected to decline gradually.

ABARES foresees lamb prices easing back in real terms to 539c/kg by 2019-20 and sheep prices to 323c over the same period.

In the short term, flock rebuilding is expected to drive higher prices for breeding ewes in particular.

The pace of flock rebuilding will be tempered by expected strong export demand for sheep meat and hence relatively favourable prices for both lamb and sheep.

Graziers will be facing the challenge of choosing between flock rebuilding and turn-off for favourable prices.

The shifting focus from wool to prime lamb production in recent decades has also been borne out by the latest figures.

In 2014–15 lamb slaughter is expected to reach 22.3 million head, the highest since 1971–72, when the Australian sheep flock was more than twice its current size at 180 million head.

In 2015–16 Australian lamb slaughter is forecast to fall by 4 per cent to around 21.5 million head, assuming farmers rebuild flocks in response to average seasonal conditions.

Mutton production to fall sharply in 2015–16