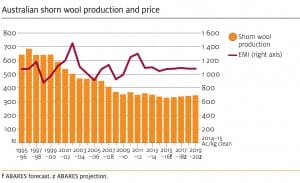 Source: ABARES. Click on chart to view in large format.

The Eastern Market Indicator is forecast to increase by three percent to average 1075 cents a kilogram in 2015-16, according to ABARES annual outlook report released this morning.

The official commodity forecaster then expects the benchmark indicator to average 1069 cents a kilogram in 2017–18 (in 2014–15 dollars) before declining slightly towards 2019–20.

The rise is predicted to occur largely as a result of an assumed lower Australian dollar and a forecast increase in demand for woollen clothing and textiles in major consuming countries as income growth strengthens.

However, falling oil prices are expected to improve the price competitiveness of competing synthetic fibres which will limit the upward pressure of the assumed lower dollar on the EMI price.

Prices are then expected to decline marginally in real terms to 1064c/kg as Australian wool production picks up in response to expected flock rebuilding.

Shorn wool production is forecast to decline by around 4pc to 336,000 tonnes greasy in 2014–15, reflecting a decline in the number of sheep shorn and lower average fleece weights as a result of poor pasture conditions across parts of the eastern states.

The volume of wool cut per head is also forecast to decline in 2015–16, reflecting an expected decline in the proportion of wethers in the sheep flock.

Shorn wool production is projected to increase slowly and reach 345, 000 tonnes in 2019–20, largely reflecting the expected increase in the number of sheep shorn as the national flock rebuilds over the outlook period.

A declining trend in the share of wethers in the Australian sheep flock is expected to result in the average cut per head falling to 4.3 kilograms by 2019–20.

Australian wool exports are predicted to fall by 2 per cent to 418 000 tonnes (greasy) in 2014–15, reflecting the forecast fall in Australian sheep numbers.

Over the same period, the value of Australian wool exports are tipped to fall by 6 per cent to around $2.7 billion.

In 2015–16 wool exports are forecast to decline by a further 4 per cent to 400 000 tonnes. Wool exports are projected to increase slowly over the remainder of the outlook period to around 420 000 tonnes in 2019–20, reflecting projected moderate growth in the national flock.

In the 12 months to January 2015, wool became more price-competitive relative to polyester, with the 21-micron wool to polyester price ratio declining from 5.04 to 4.90.

However, ABARES predicts that in the short term, the price competitiveness of wool is expected to decrease relative to synthetic fibres.

Synthetic fibres are produced from refined petroleum and therefore their prices are linked to world oil prices.

Sharp falls in the global price of oil in late 2014 and early 2015 are expected to increase the price competitiveness of synthetic fibres.

The International Energy Agency indicates that many of the conditions that drove oil prices sharply lower in 2014 are likely to persist in the short term, with growth in global oil production outstripping growth in consumption.

“This suggests that synthetic fibres will largely maintain their price advantage over wool, at least in the short term,” ABARES explains.

“Cotton is the other major fibre competing with wool.

“With a decline in cotton prices forecast in the short term, the price competitiveness of cotton against wool is also expected to increase.

“The increased competitiveness of alternative fibres against wool is expected to limit the upward pressure on the EMI price of an assumed depreciation of the Australian dollar.”