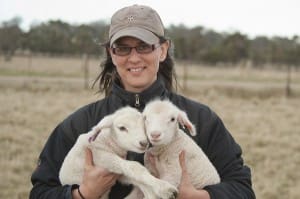 Sheep well-being has captured the attention of Australia’s Sheep CRC and the international research community.

The Sheep CRC has embarked on a five-year program to develop a new risk management system to predict which individual animals in a flock may be at risk, utilising new and current automated animal monitoring systems.

Post-Doctoral Research Fellow at the University of New England, Amanda Doughty, is leading one of the research projects within CRC program, and received a very positive response to the Sheep CRC’s approach at the recent International Society for Applied Ethology (ISAE) 2014 Congress in Spain.

“We’re not just trying to eliminate wellbeing and health issues, but also respond to future needs that we can anticipate for an individual animal,” Dr Doughty said.

“The response to the CRC’s approach to proactive management of wellbeing was really positive and supportive because the scientific community knows that this is a very difficult field and that developing a methodology that is easily used in an extensive sheep grazing system will take time to achieve.

“There is growing interest around the world in animal wellbeing and it was encouraging to know that other research agencies view this long-term work as being built on sound fundamentals.”

“All of the researchers I spoke with were very impressed with the quality of data already available from the CRC’S Information Nucleus program,” Dr Doughty said.

Sheep behaviour patterns could be indicators of health issues

Dr Doughty’s initial trials in this area investigated whether behavioural patterns – such as day-to-day changes in the ‘roll call’ or order of sheep as they walk to a feeding point – could act is an early indicator of future health or well-being issues.

“While the preliminary trials did not reveal any clear indicators for immediate use, the information helped identify a number of areas worth further investigation,” she said.

“For example, ewes with the highest worm egg counts were found to have the most movement within the roll call, but further research is needed on this finding to test whether a change in behaviour could be an early sign of a parasitic infection.”

Further data will be collected at UNE’s Kirby Research Station as soon as the next drop of lambs is born later this month.

Using radio frequency animal identification and walk-over-weighing systems, a range of measurements will be taken at different times in the animals’ lives to calculate indexes that rank animals in terms of their well-being and productivity.

“Integration of data collected at different times on individual animals will facilitate better-informed decisions on selection and management of the flock,” Dr Doughty said.

“The goal is to develop management systems whereby farmers are able to alter management when sheep reach key threshold indicators in order to prevent compromised well-being in the future.”