SHEEP, lamb and grain prices have helped lift farm prices by up to 30 percent over the past three years in more secure rainfall areas of Victoria’s cropping and livestock farming areas.

The increasing value of grain and grazing properties in the better rainfall areas of the state has been highlighted by the recent sale of the Marnoo district property Wallaloo East for $6.3 million, or $1325 an acre, at auction in Stawell.

The 1902 hectare cropping and sheep property at 1722 Wallaloo East Rd in Wallaloo East was sold for Graeme and Kaye Ellen to a neighbouring farmer by Rodwells Ruralco Property in conjunction with J B Barham Real Estate of Stawell. 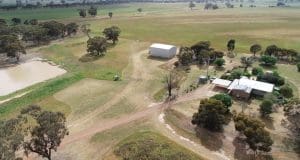 The Wallaloo East property from the air.

The Wallaloo East aggregation featured seven blocks sold as a whole, including 164 hectares with a three-bedroom brick and weatherboard family home and a shearing shed block of 154 hectares with original shearer’s quarters. The Ellen family has farmed in the area since 1889 and the sale ended 130 years of continuous family ownership.

The property’s Banavie blood Merino ewes were dispersed on AuctionsPlus in late October, with the young ewes making up to $276 and the five year-olds selling to $235. Infrastructure included farm dams, good stock proof boundary and internal fencing, sheep facilities and good local road access to all the blocks. 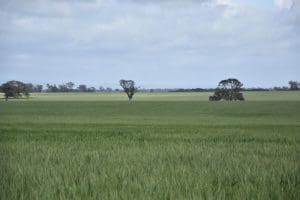 “What we’ve seen since the wool and the prime lamb prices improved is the value of grazing country has gone up probably 30-50 percent.

“The grazing country was lagging behind the cropping country and now it has certainly picked up,” he said.

“It is a significant increase for a grazing property,” he said.

He divides properties into the categories of cropping land with the opportunity for grazing, straight grazing or cropping.

“The market has certainly scooted away,” he said.

“We sold a property last year that was grazing with the opportunity for cropping and we thought it would make $1600 an acre and most of the local people said I was on drugs … it made $1825 an acre.”

Most sales are being made to neighbours or local landowners enjoying the low interest rates and with substantial equity in existing land, he said.

Good farming stories in some areas

Mr Brown said the media has been dominated by the rural disasters of drought, floods and more recently fire, but there has been limited coverage of the areas enjoying good seasonal conditions.

“In the Wimmera, southern Wimmera and through to Victoria’s Western District, there are some great stories with good lamb prices, wool prices have been strong and cattle have been reasonable.

“There is money around in these areas that they are seeing once-in-a-lifetime.”

The good commodity prices and land values have helped keep young farmers on the land and given others their retirement income, he said.

“It was a tough enough season last year for cropping, yet lamb and wool prices were still strong, and that got people with mixed enterprises through – it’s just great to see, it has been a financial success.”

Mr Brown said agents are struggling to get good listings like Wallaloo East because farmers are “hanging on.”

“Well for one reason, what do they do? The interest rates at the bank are very low, so they are leasing their farms out to other farmers.

“A lot of farmers are just hanging on for a few years because things have been so good.”

Mr Brown said farmers from drought-affected areas were interested in buying land in more secure rainfall areas, but were unable to sell their properties for reasonable prices to enable them to buy elsewhere.

“They want to come and there is a lot of enquiry, but they are locked in by the drought.

“People are looking for reliability of rainfall and I think southern Wimmera and down through the south-west has the reliability – we might be down 200mm on our average rainfall, but we’ve got through,” he said.

“The word is reliability, not total rainfall.”

He said about 80 people attended the Wallaloo East auction.

“It is just great there is that sort of confidence in the industry, isn’t it?”

Mr Brown also believed there was more upside in the rural property market.

“I think there is a bit more there, with the interest rates just helping the job.

“You’ve got the double whammy with people’s equity going up and the interest rates going down.”