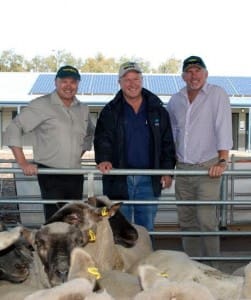 Wellard donated the 289 quality Western Australian lambs to hunger relief agency Foodbank WA as part of the inaugural Lamb Legends campaign to provide fresh meat to people who struggle to put a nutritious meal on their dinner table.

Wellard livestock manager Paul Mahony said the company bought the animals at the recent Muchea and Katanning sales and immediately donated them to Foodbank WA, in what was the campaign’s single biggest contribution.

“As a company that supplies nations in the Middle East and Asia with protein for their citizens, we also have an obligation to support disadvantaged Australian families,” Mr Mahony said.

Wellard also acknowledged the contribution of other businesses that donated their services to transport and process the animals so they can be quickly and efficiently provided to Foodbank WA. Narrikup-based processor Fletcher International processed all donated sheep free of charge, while Treasures Transport and Stockhaul WA assisted with their transport.

The Lamb Legends campaign is an initiative of the Nationals WA and has been supported by sheep graziers, livestock vendors, transport companies and meat processors.

The 448 donated animals will provide roughly 75,000 servings of lamb to help fill an identified protein gap in the diet of WA’s hungry.

Member for the Agricultural Region Paul Brown MLC, who spearheaded the campaign, said the result was a tremendous win for organisations serviced by Foodbank WA.

“Lamb Legends was extremely well-received by the agricultural sector, which showed an unprecedented depth of generosity to help those less fortunate than others,” he said.

“Lamb is also dense with iron and zinc, vitamin B12 and B6, niacin, riboflavin, selenium and a long list of other beneficial daily human nutrient requirements,” he said.

“Having such an important red meat donated towards the diets of those in need is a fantastic outcome for charity and a credit to all those in the industry who rose to the occasion.”

Last year, Foodbank WA provided more than 4.5 million meals to disadvantaged WA families. The animals donated by Wellard and others will provide about 55,000 portions of meat for distribution by Foodbank WA.

The sheep and lamb donation is the second time Wellard has supported Foodbank. In November 2012 Wellard provided Foodbank in Queensland with its biggest ever single donation of livestock (25 cattle) using a newly created beef cattle supply network.