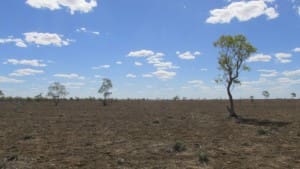 A droughted paddock near Longreach in Central Western Queensland.

In a joint statment announcing the package, Prime Minister Tony Abbott, Agriculture minister Barnaby Joyce and Infrastructure and regional development Minister Warren Truss said the investment was an acknowledgment of the difficulties being experienced by farmers and by the communities they help to sustain.

“It is critical these communities remain viable and that people stay in jobs so that they can take advantage of better conditions when the drought break,” the joint ministerial statement said.

“Helping farmers through times of drought is in our national interest. Despite unprecedented drought conditions in some parts of the country and a third failed wet season in large parts of the north, Australia’s agriculture sector will contribute an estimated $52 billion to the economy this financial year.”

In recognition of the drought’s effects on farming businesses and regional communities, the Commonwealth Government will provide:

These measures build upon existing Commonwealth support to farmers experiencing hardship, such the Farm Household Allowance, which is currently flowing to over 4,800 farmers or their partners.

Over the past two years the Commonwealth has provided around $190 million to support drought-stricken farmers and approved $270 million in concessional loans to 531 farm businesses.

Further measures to support farmers who are preparing themselves for the damaging effects of drought will be announced in the forthcoming Agricultural Competitiveness White Paper.

For information on the new drought support measures go to www.agriculture.gov.au/drought

Funding will help, but red tape on loans still a problem: AgForce

AgForce has welcomed the Federal Government’s announcement to provide $83 million in multi-tiered funding for regional communities however red tape around concessional loans and income assistance was still causing angst among Queensland farmers.

“It’s good to see the Federal Government provide some more funding to tackle the enormous impact the drought is having on our members and regional communities,” Mr Maudsley said.

“Our members will welcome almost $26 million to manage feral animals, and the addition of weed management is a positive step that AgForce has called for previously.

“The Government has recognised the need for further support with $25 million for social and community programs and mental health support. Importantly a further $1.8 million for financial counsellors in affected areas will deliver much needed practical assistance in accessing other programs.”

Mr Maudsley said the $250 million continuation of the current concessional loans scheme was necessary, but AgForce members needed the government to fix the excessive red tape tying up this support.

“Our members are concerned about the current eligibility criteria and structure for these loans,” he said.

“In Queensland alone, more than $100 million in urgently needed funds remains unspent due to the eligibility criteria, issues with loan repayment periods and securing lender support.

“Simply rolling over the existing settings risks will get the same result in 12 months. These funds must get out to those in need now.

“I’ve raised these issues with the Federal Government in the past and we’ll continue to do so in the future.”

A recent AgForce survey showed about 50 per cent of members had seen their incomes reduced by up to half, and one-in-six had seen a reduction greater than 75 per cent due to drought over the past three years.