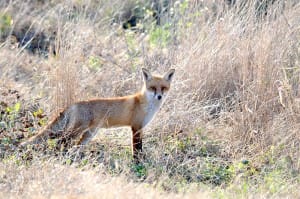 The Victorian Coalition Government has introduced bounties to reduce the impact of foxes on calves, lambs and native fauna. Image: DEPI

More than 300,000 foxes have been shot under the Victorian Coalition Government’s bounty program, but there are plenty more out there.

More than $3 million has been paid out to hunters in the bounty program, with Portland hunter Gary Wombwell recently submitting the 300,000 scalp.

“Anything to control the fox is a good thing.

“You can see how many are around and you have to do everything you can – poison, the bounty and recreational shooting – to help control them,” Mr Wombell said.

The hunter has handed in 261 fox scalps at Warrnambool and 512 since the bounty began in October 2011.

Mr Wombwell has been hunting foxes for 30 years and handed in the scalps on behalf of a small group of local shooters. He said the program was a great incentive for local shooters to reduce the fox population and help promote the survival of native wildlife.

Agriculture and Food Security Minister Peter Walsh said the Coalition Government understands the financial and emotional toll foxes and wild dogs take on Victorian livestock producers and we are committed to helping reduce their numbers.

“Our fox and wild dog bounty is making a real difference for producers, with 300,000 fewer foxes now roaming Victoria’s landscape.

“This is compared with the former Labor government’s Fox Stop program, which eradicated just 20,034 foxes in three years.”

The bounty of $10 per fox scalp and $100 per wild dog skin not only aims to compensate hunters for their efforts, but also recognises their important contribution to controlling these vicious and damaging pests, Mr Walsh said.

Mr Walsh said the Coalition Government was committed to an integrated approach to fox and wild dog control which included a combination of baiting, trapping and shooting.