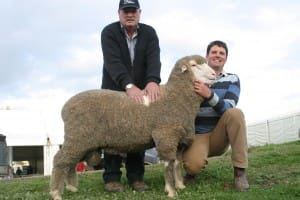 With their $20,000 sale ram were from left, Collandra North principals, Graeme Lawrie and his son Sydney, at Bendigo.

KELVIN and Jackie Pendergast made a $20,000 decision at the Australian Sheep and Wool Show yesterday.

Kelvin found the poll sire he had been searching for and after consulting with wife Jackie their decision was made, but they had to move quickly to get ahead of other interest in the ram.

The ram’s breeders Graeme and Sydney Lawrie, from the Collandra North Poll stud, Tumby Bay, SA, had some interest from a West Australian breeder but had not clinched a deal.

But the Pendergasts decided it was worth $20,000 to get a ram of that calibre and they expect to recoup the cost through ram and semen sales, and his impact on ewe quality.

Kelvin and Jackie, who own the Pendarra Merino Stud at Benabra in Victoria, were among the Merino breeders at Bendigo this weekend who didn’t wait for the show’s main ram auction today to buy their next sire.

Even before the advertised sale rams were yarded for the ASWS auction at noon today, at least two rams on display elsewhere on the showgrounds had new owners. 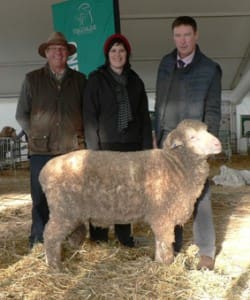 The other sale that Sheep Central confirmed was an 18 micron 13-month-old One Oak Poll ram sold by Alistair and Natasha Wells from Jerilderie, NSW, to the Stavely Park Stud at Stavely, Victoria, for $10,000.

Stavely Park co-principal Felicity Brady said she liked the ram’s staple length and silky soft muzzle. The ram was also very structurally correct and wide through the body, with a very good backline, she said.

Collandra North Poll co-principal Sydney Lawrie said it was fantastic to sell a ram for $20,000.

Collandra North sells about 200 rams a year, including 110 to be offered at an on-property sale on August 21, but Sunday’s sale was the highest price ever achieved by the stud.

“It was a real high to turn around and sell a ram for that amount.

“We were fairly happy with the prices both times.”

Sydney said the 19.1 micron August 2013-drop ram was a big pure sheep, with a lot of gutsy wool on him and “great sirey outlook”.

The ram was by a $29,000 Greenfields ram, Bond XP87, bought in Adelaide three years ago. Bond XP87 was bred out of a Greenfields ewe using Wallaloo Park Maximus semen.

Last year the Greenfields ram sired more good sons and this gave Sydney and his father Graeme the opportunity to sell one.

Kelvin Pendergast hoped his new purchase would take his poll stud to the next level.

“He has got the type of wool – very bright, lustrous and free-growing – that I have always been looking for.

“He also has very productive skin that’s pushing wool out.”

Kelvin was also impressed by the ram’s frame, muscling and structural correctness.

Collandra North has retained half semen rights in the ram and will still show him at the 2014 Adelaide Royal Show in September.

Joint agents Ruralco, Landmark and Elders have catalogued 122 Merino rams for sale at Bendigo today, including the Grathlyn stud’s Supreme Merino exhibit of the show, Lot 95, Grathlyn A25117.

Grathlyn principal Andrew Rayner said the win was the stud’s first supreme Merino exhibit sash at the national show in 45 years of trying from the stud’s base at Mudgee, NSW. The ram’s sire, Langdene 074073, was Australia’s supreme Merino ram in 2009. The Langdene sire was putting size and wool cut into his progeny without any loss in micron or wool quality, Andrew said.

“We’ve got eight full brothers to him at home and I don’t mind the folding stuff,” he said.

More news and photographs from the Australian Sheep and Wool Show in Sheep Central on Wednesday.