Tom aims to increase kilograms per hectare and dollars per kilogram and multiply using artificial insemination, embryo transfer and natural mating. As a result of this strategy he has very strong, high muscle sheep and that’s why he invested in a Racewell Sheep Handler 20 years ago to make handling them easier.

Tom’s farm at Holbrook has a total area of 4500 acres where he runs about 11,000 fully recorded ewes, a few cows and a bit of cropping as well. 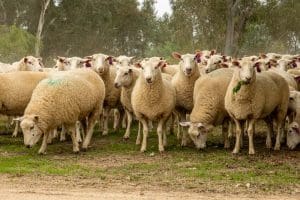 “We’ve had a Te Pari Racewell Sheep Handler for nearly 20 years now. We’ve got some of the older models and have upgraded over time,” he said.

As we’ve selected sheep for muscle, they’ve got a lot stronger, particularly in some of our terminal breeds with the short muscle fibre increase they’re harder to handle, you put our ewes in a race now and try to drench them, they get their head to the bottom and they’re very hard to get up.

“The Racewells have done a good job at being able to contain them (the sheep) and making it a pretty simple job,” Tom said.

RFID tags are used to record breeding values and animal data. Scanning and recording ear tags is made easy with the Racewell system as the integrated scanner in the handler reads the tags and then he can see all the information on the weigh scale screen for each animal.

Tom can then weigh them, record weight gains and sort each animal into different groups for mating.

“We’ve had very little issues with the Racewells, we can get them serviced, we have someone come here once or twice a year to service them or as needed and that’s a big thing for us to be able to maintain them. We have very little down time; they seem to work pretty well and that’s over four machines that handle a lot of sheep on a weekly basis. We crutch in it, the give vaccines in it, do a lot of our recording, and a lot of joining, we single side join 11,000 ewes, so they’re often going through there,” Tom said.

With a Racewell Sheep Handler you can automatically or manually catch sheep in the handler and it will hold them securely while you do whatever needs to be done. The automatic catch system is operated by sensors in the side of the clamp. The sensors can be adjusted to catch sheep in different positions; catch further back in the clamp for crutching or further forward in the clamp for drenching.

The latest Racewell Sheep Handlers have 4 different operating modes to control the gates and clamp and are designed to maximise throughput for different jobs. The Racewells also come with a remote control so that you can move away from the handler to help get the next mob in the race or go and get supplies while still having control of the machine with the push of a button.

“We find they (the sheep) run pretty well into the machines; we’ve got pretty good force pens. Our sheep are pretty bare so we don’t need to tip them on their side to crutch, we can do a basically glorified buttonhole just standing up and that works pretty well,”  Tom said. Having a good quality sheep handler has helped make Tom’s job easier and also helped him to retain staff over the years. The ease of using the Racewell Handler means that the labour Tom has doesn’t need to be very high skilled or very strong to handle his big, high muscle sheep. Pretty much anyone can do the job because the Racewell catches and holds the sheep and takes all the hard physical work out of it.

“One of the biggest things with sheep is if people really dread a job they’re likely to put it off, and you know drenching high muscled sheep in a drenching race, yes you can do it but all of a sudden if you’ve got to do tens of thousands it becomes a pretty hard job.

“Drenching huge numbers of ewes in a drenching race is a high skilled, job so the sheep handler is allowing us to be able to change the labour that we use,” Tom said.

Racewell Sheep Handlers are made in New Zealand by Te Pari Products.

Racewell Sheep Handlers are a top-of-the-line product and truly built to last as can be seen from Tom’s 20-year-old machine that is still in use today.

Te Pari’s Australian operation is based in Epping, Victoria where the company stocks a range of machines and parts. They have a great team of experienced staff that go all over the country to sell, deliver, commission and service Racewell equipment and also the range of Te Pari Cattle Handling Equipment.

“I think having a good sheep handler is becoming more and more important for a modern sheep business. I think just having technology that works and works every day is really important and certainly Te Pari have done a pretty good job of doing that for us,” Tom said.

To learn more about Racewell Sheep Handlers or to watch them in action on video, then go to www.tepari.com or give Te Pari a call on 1800-650-682.