RESEARCH by the CSIRO shows Australia’s sheep meat sector, despite having increased production over the past 30 years, is making no contribution to global temperature increases and its impact is trending downward.

It drew on annual Australian greenhouse gas emission data from 1990 to 2017 to measure the ‘’radiative forcing’’ footprint of the Australian sheep meat industry.

Radiative forcing is the difference between solar irradiance (sunlight) absorbed by the Earth and energy radiated back to space.

The study started with a calculation of the amount of emissions produced by the Australian sheep meat flock in 1990.

The research showed that the radiative forcing footprint of Australia’s sheep meat sector has plateaued over the past 30 years and reached the point of a net zero increase in 2020, a status that could be described as “climate neutral”.

From this point in time onwards, the sector’s radiative forcing is projected to be in decline, Dr Ridoutt said. 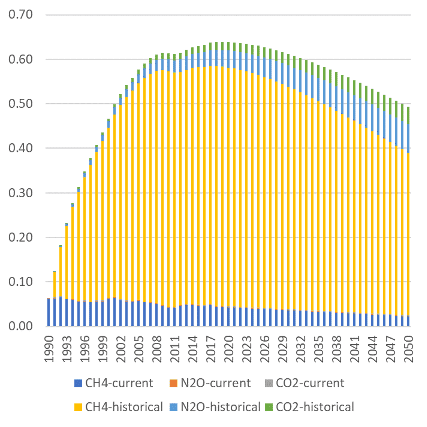 The explanation for this is the downward trend in sector methane emissions, from 371 kt in 1990 to 290 kt in 2017. Since methane has a relatively short atmospheric lifetime, of around 12 years, historical methane emissions are dissipating more quickly than being replaced by current emissions.

The stabilisation of the sector’s radiative forcing footprint meant it was no longer driving atmospheric temperature increases, Dr Ridoutt said.

This is despite the Australian sheep meat sector having made incremental increases in its annual output of live weight since 1990, enabled by improved productivity.

“The Australian sheep meat industry has already achieved a status of stabilisation, which is consistent with the goal of stabilising global atmospheric temperature,” Dr Ridoutt said.

If sector productivity continues as it has over recent times, that is improved meat and wool production from the same number of sheep, the sheep meat industry’s radiative forcing footprint will trend downward, Dr Ridoutt’s research showed.

Dr Ridoutt’s view is that the Australian red meat industry should be focusing its sustainability efforts on working to stabilise its radiative forcing footprint.

In his opinion this is the most relevant goal for the industry to aim for to achieve the temperature-based climate stabilisation goals as expressed in the 2015 Paris Agreement.

“The whole idea of demonstrating no increase to radiative forcing is something I feel is really viable for the industry, it just needs to work towards getting more understanding of the concept,” he said.

“The Paris Agreement (of 2015) is not about reducing all emissions to zero, it is about stabilising climate, it is accepting the fact that we’re not going to get back to the pre-industrial era, it is about stopping the climate from racing out of control.”

“The sooner every industry can get to that, the temperature will stop rising and if we can do it soon enough we will stay within the IPCC’s 1.5 degree global temperature rise limit.”

Beef industry ‘still has a way to go’, but metrics vary on how far

It is expected that in coming months the CSIRO will have also completed work commissioned by Meat & Livestock Australia that will show the Australian red meat industry’s greenhouse gas emissions measured under the GWP 100 (Global Warming Potential 100) metric and industry emissions measured using the GWP Star metric.

Dr Ridoutt said the Australian beef cattle industry “still has a way to go”, and says his research shows methane emissions are rising in the sector.

But it was also important to note he said that the industry’s radiative forcing footprint is very different under different models, such as the GWP 100, and the GWP Star model developed by independent climate scientists at Oxford University.

As the below chart from his paper shows, the industry’s radiative forcing footprint is substantially lower under GWP star:

Despite having become used almost ubiquitously in greenhouse gas assessment, reporting and target setting around the world, the GWP 100 metric is not the most relevant climate metric for use in all policy and decision-making contexts, especially where substantial short-lived emissions, like methane from livestock, are involved.

GWP 100 was the metric adopted by many Governments and policy makers when the Kyoto Protocol was signed in 1997.

It was adoped as a means to allow emissions of all gases to be placed on a common scale of so-called “CO2 equivalence” over a 100 year time horizon, to enable the trading of “carbon credits’’. One carbon credit represents one tonne of carbon dioxide equivalent (tCO2-e) stored or avoided.

However, the GWP 100 accounting metric is also recognised as having significant shortcomings, in that it does not provide an accurate reflection of the effect on global temperatures of short-lived and long-lived gases.

The Carbon Dioxide (CO2) molecule persists in the atmosphere for hundreds or thousands of years.

The Methane (CH4) molecule is much shorter-lived in the atmosphere, where it is destroyed through oxidation after 10 or 12 years to produce carbon dioxide and water vapour.

“People talk about CO2 equivalence but there is no absolute equivalence between one gas and another,” Dr Brad Ridoutt, Principal Research Scientist with CSIRO Agriculture and Food, explained to Beef Central in a recent interview.

As more CO2 emissions are released, more is added to the accumulating ‘’stock’’ of CO2 in the atmosphere.

“With methane it is like a bathtub but with the plug out. You have got some water going into the bath from a tap and some going down the drain.

Therefore, CH4 is considered to ‘’flow’’ in and out of the atmosphere. 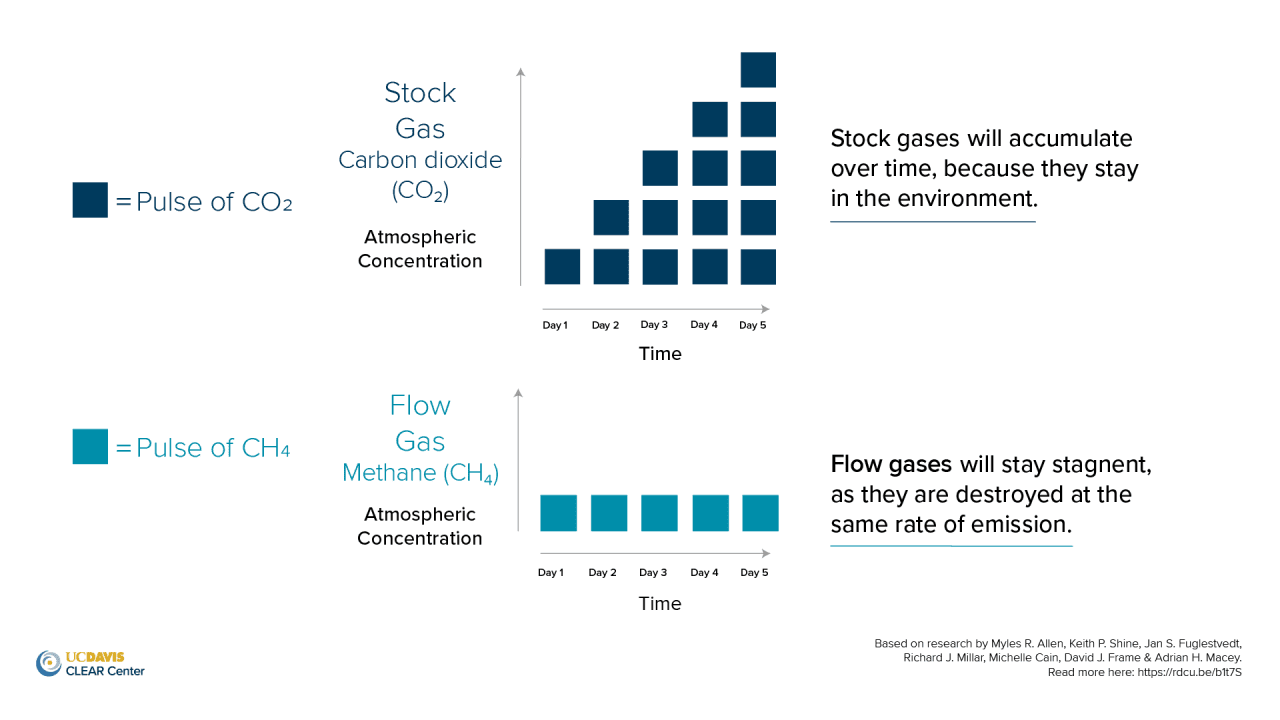 Another important point was that methane emissions from livestock are part of a biogenic cycle, as depicted below in this graphic produced by the Clear Center at the University of California Davis: A simple explanation is that as grass grows it captures CO2 from the atmosphere. The grass is then eaten by a cow and churned around in its gut, where some of the gas is converted into methane and then belched back into the atmosphere.

As that methane breaks down over the next 10 to 12 years, it degrades into CO2 and water vapour. This is in effect the sameCO2 the grass captured before being eaten and belched out as methane a decade or so before.

Emissions from this natural cycle where what is emitted is also offset by what is recaptured has different implications for global temperatures than those created by man-made processes that result in CO2, such as burning fossil fuels: When fossil fuels are extracted from the earth and burned, the CO2emissions released into the atmosphere adds to stocks which are constantly accumulating.

Opponents of livestock production tend to draw attention to only what livestock emit, and suggest the story ends there.

But the story doesn’t end there, because that ignores the equally important and balancing contribution of what is recaptured by the same natural cycle under a stable livestock population.

It is also important to recognise that despite being a short-lived greenhouse gas, methane is more effective than carbon dioxide at warming the atmosphere as it absorbs much more sunlight energy. The net effect of the shorter lifetime and higher energy absorption is reflected in the GWP 100 metric. The GWP 100 metric for methane also accounts for some indirect effects, such as the fact that methane is a precursor to ozone, and ozone is itself a greenhouse gas.

Therefore, when considering the impact of the livestock sector on global temperature rise, scientists make the point that it is important to consider the 10-20 year trends in livestock population and consequently, the extent of methane emissions flowing into the atmosphere.

According to Dr Ridoutt, ‘”methane has a separate profile that impacts over a much shorter time”.

“It is much less relevant to stabilising the climate, unless of course you are growing your methane emissions.”

Herds that are relatively stable, falling in size, or even slightly increasing, can in fact lead to a “cooling effect” if the overall methane levels are in decline, Dr Ridoutt said.

MLA Manager – Sustainability Innovation, Doug McNicholl, said it was important for the Australian red meat industry to be able to get the “numbers on the table” so it could compare, contrast and communicate the industry’s position using both the GWP 100 metric which is the IPCC and the Australian Government’s adopted method and using the GWP star metric. 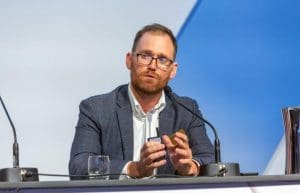 “Our stakeholders want MLA to report numbers using multiple metrics, and we are working on that with the CSIRO,” Mr McNicholl said.

“That is our role, we are a research and development service provider. Following the release of this information, peak industry councils can consider implications for industry policy and priority setting for research, development, adoption and marketing investment.”

Separate to the issue of how emissions from Australian livestock are accounted for and reported is the issue of what the Australian industry is doing to reduce greenhouse emissions and improve carbon storage alongside profitable livestock production.

In 2017 the Australian red meat industry launched the Carbon Neutral 2030 initiative to coordinate a range of approaches throughout the red meat supply chain to reducing emissions and increasing carbon stocks.

Mr McNicholl told Beef Central that some of the world’s largest red meat retailers are “asking for the numbers” and engaging suppliers in climate action.

This included major US food retailer Walmart which has set a goal to reduce 20 million metric tonnes of greenhouse gases from its supply chain under its “Gigaton Project”.

“An opportunity exists for the Australian red meat industry to secure ongoing market access and even grow the value of sales through promotion of environmental stewardship practices enabled through livestock production,” he said.

Some practices reduce methane but at expense of increasing other gases

Dr Ridoutt said the red meat industry also had to be mindful about practices that reduced methane but effectively increased carbon dioxide and nitrous oxide output at the same time.

Feeding grain to animals was one example, in his opinion.

“In the feedlot you reduce your methane by growing them faster, but how are you doing that? By feeding them more crops, and those crops have got CO2 and N2O associated with their production, that is one obvious example.

“A lot of things that involve making the industry more efficient and reducing methane involve using more intensive use of fuels and fertilisers and irrigation.”

It is worth noting that the same issue applies to plant-based proteins which are often touted as a more environmentally-friendly alternative to red meat, but which face a major challenge to demonstrate net zero CO2 and N2O emissions.