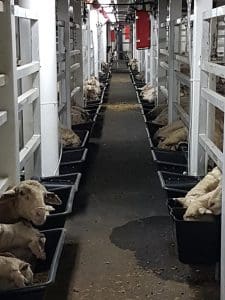 SMALLER, regular shipments of live sheep to Middle East markets could be a big part of the trade’s future as supplies tighten in Western Australia and sheep meat prices stay high, according to leading industry consultant Steve Meerwald.

The former managing director of Wellard Rural Exports heads up a joint venture between Harmony Agriculture and Food (HAAFCO) and the Chinese company Hopshun Australia, which is also part of the Sino Marine consortium.

The Yangtze Harmony departed Fremantle earlier this month with 12,500 sheep bound for Oman as a trial shipment. The Yangtze Fortune is due to be delivered in June.

“Although there is a great benefit in large shipments from Australia generally, it is going to continue to be challenging to fill large vessels and smaller vessels may well be a big part of the future of the trade of sheep to the Gulf.”

Mr Meerwald is also a director and executive general manager of HAAFCO and the joint venture recently invested $50 million in establishing a livestock supply system, including land and a feedlot in Western Australia, and the 5946 hectare Mt Fyans station at Dundonnell in Victoria.

He said the live export of sheep is currently challenging on the supply side and on a cost basis, with sheep, lamb and wool prices at record highs in Australia.  The WA flock situation was symptomatic of general farming practice change over the past 20 years, while sheep prices have been disappointing.

“Plenty of them have made the situation to just get out and broadacre farm which has led to significant deterioration of infrastructure available throughout the wheat belt.

So there is a lot less farms that are sheep-equipped – so waters and fences are gone, shearing sheds aren’t up to OH&S standards,” he said.

“It’s going to make it difficult to rebuild, but the underlying driver of a rebuild in the sheep flock is going to be sustainable returns; good markets for sheep meat and for wool, and we’ve got that at the moment, hopefully that will stem the tide.

“It’s going to be a long and difficult rebuild and those who have stayed in are probably going to have some pretty good times, because comparative returns per hectare for some cropping operations are probably not stacking up to the returns for sheep,” Mr Meerwald said.

Mr Meerwald expected live export to a role to play in rebuilding the Western Australian flock.

“Western Australia will supply whatever it can, but there will be a price and availability tipping point.

“All of the exporters would prefer to come out of WA; they save themselves 8 or 9 days turn-around on a ship , and that’s not just time, that’s cost,” he said.

“It also pivots of the relative price of WA sheep compared to eastern state sheep, and the weight of sheep, whether the sheep available in WA are lighter or heavier.

“It is increasingly difficult, regardless of the situation, to source enough sheep to fill boats solely out of WA.”

Mr Meerwald said a relatively small number of markets had “stayed true” to the import of live sheep, although they were still importing sheep from other sources other than Australia and importing frozen and chilled sheep meat.

“For a range of cultural and political reasons some of these markets have stayed strong despite what are currently high prices, but they have been higher.

“A few years ago Australian sheep landed in the Gulf were more expensive than they currently are and they were sustaining volume, although the volume is falling away and we are at a pretty low level of exports now.”

Mr Meerwald said the Sino Marine vessels were of relatively small capacity for sheep and not the most economical vessels to operate with sheep on long hauls.

“But we are looking at building up a regular calling into the Gulf to service a couple of clients and based on the outcome of these trial shipments we will work out where we are going.

“We are hopeful of doing multiple shipments a year on a regular scheduled basis.”

Mr Meerwald believed the live export of sheep to China would have the same issue affecting the live cattle trade to China – that the cost of Australian product with Chinese protocol puts it above either domestic product or imported alternatives.

On the potential for protocol or other changes to affect live sheep shipments to China, Mr Meerwald said:

“These things are all driven by market forces, the potential and the demand is there, but it will need to be at a price and either that will come through a correction in values of Australian sheep, which seems unlikely at this stage, or a depreciation in the Australian dollar, which is a possibility, or an increase in the cost of competitive products, which is also a possibility.”

Mr Meerwald said every market also had to face the challenge if an export protocol increased the cost base of product from a country, it puts them at a disadvantage to other markets that can import the same product.

“China protocol requirements do add cost that aren’t comparable, that are dearer than other markets importing similar products.”

The sheep shipment to Oman is a trial for the importer, the vessel and its crew, although many of the crew members have livestock experience.

“We are very confident that we will get a good result.”

Mr Meerwald said the majority of the Gulf markets have adapted to lighter and younger sheep.

“But that being said, there are a couple of markets and Oman is one, that still very much butcher markets, so they are really after the heaviest animals that they can get.

“So the reality of it is that supply really dictates what you can put into those markets and if you want volume you’ve got to go to younger and lighter sheep because that’s what’s there.”