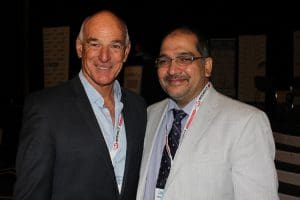 AUSTRALIA’S live slaughter sheep protocol with China was currently “completely uncommercial” and the trade might take years to mature, the 2017 LIVEXchange conference was told in Perth last week.

At the conference, live exporters were asked if the current high prices for lambs and mutton in Australia would preclude the export of live slaughter sheep to China.

Western Australian-based Emanuel Exports managing director Graham Daws believed there was demand for live sheep in China, “but once again we get back to price”.

“The price that we would have to quote them based on the current protocol would make them pay way in excess what anywhere else in the world would do,” he said.

“It may start off in a small way, but it would take a big shift to be competitive with what other markets around the world are paying.”

Harmony Agriculture and Food Company chief executive officer Steve Meerwald said having the protocol is a great opportunity, but China is an incredibly competitive market.

“If there is a big influx of sheep from Inner Mongolia demand for imported meat product just drops right off, it’s quite volatile on price,” he said.

“It is growing and it will become more sophisticated, but currently the Chinese consumer doesn’t understand a lot about how to cook meat outside of skewers or hot pot.”

Mr Meerwald said there is an opportunity to work across the sheep meat marketing spectrum in China.

“We also see great opportunity down the track with growing cattle demand,” he said.

“I think with the protocol and the growth in demand within China for sheep meat, it will follow a similar path.

“It might take some years to happen; we know that the Chinese typically negotiate complicated protocols, which is at their cost,” Mr Meerwald said.

“But I think is a foundation that I think will lead us to some significant sheep export demand in the future.”

“Which on a commercial basis, if you are trying to do any sort of volume, just would not work and why it is there is even a mystery, because the Chinese authorities clearly like to have a fairly detailed protocol and they have no commercial thought in developing.

“That’s what seems to have got through and I’m disappointed that the protocol was signed at all, because to get amendments out of it now is going to take some time,” he said.

“It will be very difficult now that it is signed.”

Mr Daws said signing of the protocol by an industry-government committee was disappointing because there is a requirement for sheep in China, but he could not see the new roles “enacted on” in the short term.

“It’s not because of the prices here, they will be paying a premium, it’s like the cattle.”

Mr Daws expected the requirements for resumption of live sheep exports to Saudi Arabia would be less costly than the China protocol. He said if the Chinese ask for protocols and there is not benefit to exporters and trade “it just doesn’t seem logical.”

The Federal Government said new and improved market access for Australian live feeder and slaughter sheep and goats into China would result from protocol conditions agreed to in high level negotiations on November 9.

Improved conditions for the export of bovine, sheep and goat semen were also agreed to at the sixth Sanitary and Phytosanitary High-Level Dialogue meeting between Department of Agriculture and Water Resources and Chinese officials in Sydney.

The Australian Livestock Exporters’ Council welcomed the confirmation of new conditions for the export of live feeder and slaughter sheep and goats from Australia.