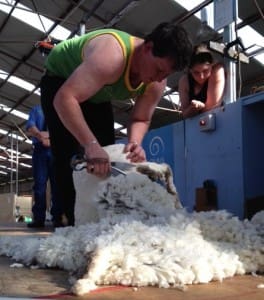 NEW Zealand has extended its unbeaten record in blade shearing tests against Australia with victory in the latest match on Saturday at the Waimate Shears in South Canterbury.

The New Zealand team of Brian Thomson, of Christchurch, and Tony Dobbs, of Fairlie, beat Australians John Dalla, of Warooka, South Australia, and Ken French, of Glenisla, Victoria, comfortably for the fourth time in a year, while Thomson has been a part of all eight victories dating back to a test in Australia in 2010.

With the history, and considerably more opportunity in New Zealand, the Kiwi pairing was always going to be warm favourite to win the test which was shorn over four long, strongwool sheep each.

It was a feature of the 48th shears, in which more than 100 shearers and woolhandlers took part in the New Zealand Spring Championships.

Before Saturday, Dalla, 26, expressed his desire to break the stranglehold New Zealand has on NZ-Australia trans Tasman blade shearing tests.

New Zealand won the previous test during the Australian national shearing and woolhandling championships in Hamilton, Victoria, two weeks ago, leaving Dalla still without victory in 11 competitions against New Zealand, including four World Championships since 2008 and seven trans Tasman tests since 2010.

“We know what sort of sheep to expect this time. We always aim for a win.”

Dalla runs a poll Merino stud in South Australia. But he and his teammate and fellow farmer French, have few opportunities to tone-up, their shearing restricted to mainly rams in March and August.

“That’s pretty much all the blade shearing available in Australia,” he said.

“We both shear a few of our own sheep to get a bit more practice each year.” 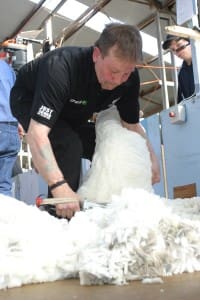 The New Zealand shearers Tony Dobbs and Brian Thomson, of Christchurch, were runners-up to South Africa at the 2014 World Championships in Ireland last year, and have more opportunity, shearing a short mainly-hill country Spring season.

Waimate is the first of nine bladeshearing competitions during the Shearing Sports New Zealand season from October to the start of April. 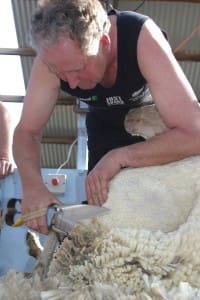 Dobbs also won the open blade shearing final at Waimate, while the glamour open machine shearing final was won for a seventh time by Invercargill shearer Nathan Stratford. Hawke’s Bay shearer Cam Ferguson is out of action with a broken leg and was unable to defend the title he won for a third time last year.

King Country’s Keryn Herbert won the open woolhandling title for a third time in four years, with defending champion Joel Henare, from Gisborne, having to settle for second place.

The senior woolhandling final was won by Peketai Puna, of Napier, and the junior final by Sharni Newton, of Gore.

The Waimate Shears was the second of 60 shows on the Shearing Sports New Zealand calendar this season. The first North Island competition of the season will be at the Poverty Bay A and P Show in Gisborne, while competition continues with competition in the South Island continuing at the 145th Ellesmere A and P Show at Leeston.