Ken Newton, left, and Matt Kelly with a Low Footprint Lamb ram being collected for the Samoan project.

AUSTRALIA’S leading breeder of worm resistant sheep and an expatriate agricultural scientist are joining forces to improve the sheep flock on the south Pacific islands of Samoa.

Samoa’s annual mean rainfall can range from 3000-6000mm, falling mostly during the summer, and with air temperatures of 22-32 degrees Celsius – these are ideal conditions for chronic worm, hoof and survival problems for its sheep.

However, former cocoa agronomist and now businessman and Samoan sheep breeder, Ken Newton, 87, was in south-west Victoria last week on a mission to boost the sheep production of the South Pacific island nation.

He thinks he has found what he needs in the easy-care maternal shedding composite ‘Low Footprint Lamb’ sheep developed by Croxton East breeder Matt Kelly, who is based near Hamilton, west of Melbourne.

Matt is the proud owner of Australia’s highest ranked ram for worm resistance, a sire with a Lambplan PWEC figure of -92 percent. His other main sire of interest to the Samoan project has a PWEC of -79%, but more desirable early shedding, muscle, fertility and growth figures. 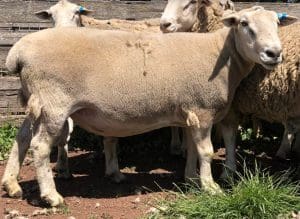 “So they are solid, they are fat, stocky, highly worm-resistant, good feet, good shedders, neat tidy animals, but were not yet setting the world on fire for some of their other production traits.

“But they are genuine doers, they are real survivors,” Matt said.

“They need no supplementary feeding in blue gums, they just live in there.”

Initially his selection was based on structure and survival, with aggressive selection of sires for worm resistance.

“The foundation sheep clearly had a lot of worm resistance in them and then with the environment they lived in, and with aggressive selection they got tougher and tougher.

“In the early days I wasn’t able to do performance recording, so I wasn’t distracted by multi-trait selection,” Matt said. 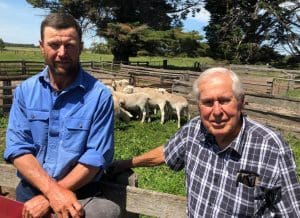 Matt Kelly, left, and Ken Newton, with some of the Low Footprint Lamb sheep.

Matt’s early selection involved mustering ewe lambs for their winter drench and ear-marking poor doers, daggy or limping animals. He also ear-marked any ewe lamb that did not rear a lamb. These sheep would never have the opportunity to be a ram-breeding sheep. For six years, only ewes that could deal with that environment had the potential to join the ram-breeding flock.

Matt and his family purchased the small Croxton East farm in 2015 and brought the best of their sheep home from the blue gums to start performance recording. He is now focussing on improving his flock’s fertility and carcase traits — number of lambs weaned (NLW), early growth and eye muscle area — while keeping its robust survival qualities. His sire team includes rams with high Australian Sheep Breeding Values for NLW, low birth weight, early growth, high eye muscle and genetic fat.

He said for sheep to be footrot resistance they need good hoof structure and the ability to build “blood immunity” and heal after any challenge. Hoof colour is not the best indicator of resistance, he said.

Matt’s sheep are on a low maintenance regimen of chemical and management treatments. Adult ewes are drenched only once a year and treated for lice if suspected, to reduce risk for neighbours. Sheep get no hoof paring or bathing. The only fly strike treatment is on the rubber ring at marking. The sheep don’t need shearing and the tails are left on.

After graduating from the University of Western Australia, Ken Newton initially worked in Papua New Guinea from 1954 as an agronomist in cocoa research. In 1978, he moved to Samoa to help establish a cocoa research station. He now owns several businesses in Samoa, including farms.

Ken said Samoa currently imported lamb and mutton from Australia and New Zealand, valued at about A$6 million annually. The Samoan people consume the imported product and any meat from their domestic sheep flocks.

“There is no industry as such and that’s what we are trying to do, get it going.”

Samoa’s first sheep breed, the Fiji Fantastic – a cross between the Barbados black belly and the Wiltshire Horn – was introduced in 2002. In 2015, Dorpers were introduced to improve carcase quality, creating the Mamoe Samoa breed. However, complete shedding of wool by the sheep is still a problem in Samoa, where variations in day lengths are smaller. With the high rainfall, sheep are susceptible to fly strike if they have any wool. The Fiji Fantastic sheep also have a very slow growth rate – 15 months to get to 32kg liveweight – and their conformation is not good.

Matt said the 14-month-old Low Footprint Lamb sire ram whose semen is being collected for the Samoan project – 170064 — sheds several times during the year.

“He will breed wool off them.

“He represents a lot of what Ken needs – he is highly worm resistant and really early shedding and he’s also very fertile,” Matt said.

“His sire was a triplet and 90pc of his sisters conceived and lambed as ewe lambs at 13 months of age.”

Ken said he has been working on a government project with the Ministry of Agriculture to get sheep semen and artificial insemination services from Australia with Hamilton sheep AI and ET expert Brian Sharrock.

“We’ve got a couple of hundred ewes that can be done.”

“The whole object of the exercise is to replace imported sheep meat and to make it easy for Samoan farmers to produce their own.

Ken and his wife Leonie have about 100 ewes waiting to participate in the AI project.

“The major problem is that the Samoan farmers, which this project is for, have virtually no money to obtain the chemicals needed for drenching and footrot.”

Worms, especially Barber’s Pole, and hoof issues are the biggest problems. One of the Newtons’ farms has an annual rainfall of 120 inches (3048mm) and the other receives 350 inches (8890mm).

“The grass is always wet and even with rotational grazing, which I practice, we still can’t beat the worm problem.

“I’m drenching every two months and I have to, so that’s why we’ve got to get these genetics.”

Ken said there is heaps of land and grass for sheep farming in Samoa, but in terms of quality of the required animals “we’re light on”. Matt said the Samoan farmers are not going to take on sheep unless they can survive in the conditions.