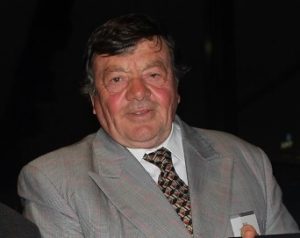 In the personal letter sent to shareholders last week, aimed at ensuring his board’s succession plan, but containing factual errors, Mr Merriman defends the independence of election candidate Will Wilson and also supports the candidacy of fellow directors James Morgan and Colette Garnsey.

The letter was mailed to shareholders just after Mr Merriman appeared before a Senate Estimates hearing in Canberra, where he admitted to having breached AWI’s Code of Conduct and damaged its standing by swearing at an ABC journalist and covertly observing Merino breeders in a research focus group behind a one-way mirror.

Mr Merriman also told the hearing he could hold up half the votes in an AWI election as proxies and the senators were told he was able to get reports on voting progress.

Mr Merriman starts his letter with the statement that “those of you who disagree with my hands-on approach to the job will be able to vote for or against me at the next election.” However, under the current system of director rotation, the AWI leader is not up for re-election in the 2017 AWI board election, and might not be until 2021. He has told Sheep Central he would stay on the board while shareholders supported him.

“Colette and James’ re-appointment will be critical to the operation of AWI, as they fulfil part of the skill sets that are outlined in our funding agreement with the government, and reported on by the board nomination committee,” Mr Merriman writes.

“Both of them are highly regarded internally at the company and contribute to the present cohesion at AWI.

“They are very important to the board’s succession plan going forward.” 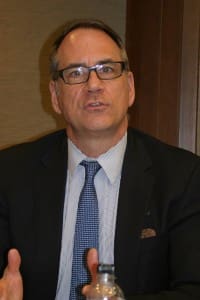 AWI board candidate Will Wilson

In the letter, Mr Merriman does not mention re-standing current AWI board member Paul Cocking, but casts doubt on the skills of wool broker and candidate Don Macdonald. The AWI chairman claims brokers, buyers and growers “unanimously agree” the WEP project should proceed, but that Mr Macdonald has been against the AWI’s Wool Exchange Portal project. Mr Merriman also noted Mr Macdonald’s former membership of the NSW Wool Committee, “which has called for an extra level of oversight of your elected board by an unelected body.” Mr Wilson has overseen AWI’s WEP project as a consultant.

“In this matter, voters have a clear choice.

However, Mr Macdonald told Sheep Central today that Mr Merriman knows the broker has only questioned AWI’s actions and motives around the WEP.

“I’ve also said when questioned in depth by the board nomination committee, that to date the management of this (WEP) project has been an abject failure, because they have got nobody on side.

“He (Mr Merriman) says in there that brokers and buyers are all on side with this, when I’m actually yet to meet any that are,” Mr Macdonald said.

“They will line up 10-deep to raise the same concerns that I have and obviously AWEX have walked away even after they tried valiantly to be part of it and to help – so he is wrong on that score.

“He is wrong on the fact that I am against the portal per se, but they’ve mismanaged this and Will Wilson is the manager,” he said.

“They desperately needed sectors of the industry to be involved with this and right at the moment it is a shambles.

“So what I was hoping to do, if elected to the board, is try to bring the parties back to the table and see if we can salvage something out of this because they have committed millions of dollars to it,” Mr Macdonald said.

No need for oversight with better communication – Macdonald

Mr Macdonald said he was asked by Mr Merriman during his BNC interview if he wanted WoolProducers Australia to be appointed as an oversight body to AWI.

“I said no, I said what they (NSW Farmers) want are better lines of communication, and if that happens, it won’t be necessary.”

Mr Macdonald believes Mr Merriman might have already had a progress report on the election voting and was “worried”.

WoolProducers Australia president Richard Halliday said Mr Merriman’s “extraordinary step” to write to shareholders to support the board nomination committee candidates, can be perceived as lobbying shareholders on how to vote.

“The (AWI) Board Nomination Committee is convened to oversight the AWI director election process and Mr Merriman is a member of the 2017 BNC.

“WoolProducers believes this is an inappropriate course of action for the chair to take, as this clearly shows a lack of independence of the entire board election process.”

Mr Halliday said when questioned by the Senate’s Rural and Regional Affairs and Transport Committee last week, AWI was unable to clearly articulate the process of selecting BNC members, including the independent members required under their Statutory Funding Agreement.

“It was also revealed in Senate Estimates last week that the chair has, in past elections, held an enormous amount of proxies, which could be assumed to have significant impact in the outcome of director elections,” Mr Halliday said.

“As AWI and the chair often state, AWI is a grower-owned company and that growers have a say in the direction of the organisation.

“The actions of the chair in writing this letter raises questions regarding the validity of this whole director election process,” he said.

“There is no transparency and no real say by growers whilst the chair and the board are allowed to operate in this way.”

“In the second paragraph, he says he is writing to correct some untruths.

“Before that he says you can vote for or against me at the next election,” Mr Keniry said.

“He is not even standing at the next election.

“Then he claims that there is unanimous support from brokers, buyers and growers for the WEP,” he said.

“This is patently untrue; indeed, later in the letter he says Don Macdonald has been against the wool portal.”

When asked what the process was for obtaining a copy of the AWI shareholder registry, an AWI spokesman said the company is governed by the rules in section 173 of the Corporations Act and also the Corporations Regulations.

Mr Merriman has also submitted a comment to Sheep Central stating that his statement that “Wool Handlers Australia in conjunction with Landmark are building a similar complementary portal in their businesses” is incorrect.

“I have now been advised that this is incorrect and while Landmark own some 50 percent of Wool Handlers Australia, they are a separate entity and are themselves not building a complementary wool portal,” Mr Merriman said.

“AWH is not creating a portal, because we don’t need to — we are undertaking a number of digital initiatives to modernise and facilitate efficiencies in the wool supply chain.”

As a member of the now defunct WEP Working Group, Mr Jones said he had voiced a number of concerns about the WEP and did not see any need for many of the things it is proposing to do.