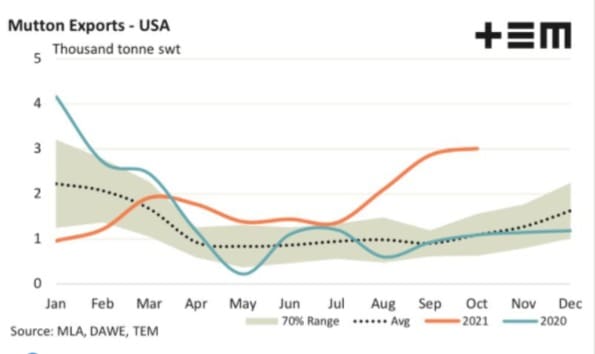 AUSTRALIAN lamb and wool producers selling cast for age ewes and wethers are reaping the benefits of a new appreciation of mutton by home-bound North American consumers.

COVID-19 has disrupted global food supply chains and limited food service sales, but it has taken mutton to the masses via US retail, with flow-on demand for Australian sheep supporting a jump in exports and recent saleyard prices.

Mutton sheep prices increased in some saleyards by up to $20-$30/head earlier this week as export competition intensified. After Thursday’s saleyard sales, the Eastern States Daily Indicator for mutton was up 5c/kg, a rise of 24c/kg week-on-week.

Meat & Livestock Australia’s industry insights & strategy manager Scott Cameron said total Australian sheep meat imports into North America (including Canada and Mexico) in October totalled 9347 tonnes, up 18 percent year-on-year. Of that lamb made up 6096 tonnes, a year-on-year fall of 8pc for the month and mutton 3251 tonnes, a 152pc year-on-year increase.

But Mr Dalgleish said there had been declining domestic supplies of lamb and mutton in the US due to the size of the flock and lower slaughter numbers.

“But there has also been a bit of a change in the demand dynamic there, with an increased appetite in the Hispanic and Caribbean communities, but also increased Middle Eastern and sub-continental Indian population with the next generation coming through eating more mutton and goat.

“It’s a bit of a combination of diminishing domestic supplies and a bit of an increase in the demand equation in that ethnic market.”

Mr Dalgleish said he is hearing that lamb is becoming a hit with the US hipsters.

“It (lamb) has got that extra environmental credentials around it as well, compared to cattle.

“There is loads of upside potential for sheep meat into the US,” he said.

“If you look at it historically, in terms of their overall protein consumption there, lamb hardly features at all, I think it’s less than one percent of their meat consumption is lamb, compared to beef, pork and chicken.

“So I think the potential for growth there is huge, but the biggest issue is getting it away from the food service side and more into people buying it to consumer in the home,” Mr Dalgleish said.

“That’s where I think mutton is making inroads as well and particularly in that ethnic space where there is already some familiarity around the style of cooking.”

Mr Dalgleish said the level of US demand for Australian mutton was very uncharacteristic seasonally and had certainly supported saleyard sheep prices.

“The US tends to have a preference for the heavier sheep, compared to the lighter types that go to the Middle East.”

Mr Dalgleish said for the season thus far Australian mutton exports to the US are running 44pc above the average trend.

Mr Cameron said mutton still made the smaller portion of the two sheep meat products, but there was a couple of human drivers which might indicate a longer term trend and continued interest.

He said there wasn’t much consumer differentiation between mutton and lamb in the United States, especially at retail, but there was new interest in mutton.

“Post-Covid we are actually seeing some new consumers who haven’t previously tried mutton were introduced to it at retail as the food service channel was closed.

“Priority to Covid-19 the majority of mutton and lamb was consumed in food service channels, in restaurants etc, and very little at home,” he said.

With eating out options limited, Mr Cameron said the use of sheep meat in US homes has increased.

“And what we do know is that prior to Covid, a significant pain point for lamb and mutton consumption amongst the US consumers was that they didn’t really know how to cook or prepare.

“During the pandemic, more consumers learnt how to cook at home and discovered how easy it is to cook, which actually led to repeat purchase in retail, and now consumers are more comfortable with preparation at home.”

He said MLA didn’t have any data on whether US retail consumers have opted for mutton over lamb because of price.

Mr Cameron Australian lamb and mutton has dominated the US sheep meat import market by volume due to its high quality and consistency of all-year-round supply, and the US has recently had domestic sheep meat supply issues.

“This has meant that Australian lamb and mutton has been a focus for retail and for food service as it has opened up.”

“We’ve also had a big online campaign as well to do that.”

Mr Cameron said in food service lamb and mutton uptake in the US is becoming less specific to high-end restaurants.

“It is becoming more available across broader sectors within food service.

“Whereas traditionally lamb was previously consumed in fine dining such as racks or middle cuts, there has now been an increasing presence of lamb at fast service or casual dining and quick service restaurants, with formats such as lamb burgers or meat balls.

Mr Cameron said there had also been an expansion of mutton and lamb use into on-trend cuisines, such as Mediterranean and North African.

“Lamb is really well suited to those and a number of large casual chain restaurants have actually made these new lamb menu items available.”

He said mutton has been riding on the coat-tails of lamb in these sectors.

Mr Cameron said previously supply of Australian sheep meat product was cyclical and based around filling in around the times when US domestic product was unavailable.

“Because of this change in consumer behaviour there are indications that there is long-term potential in more sustained growth than in the pre-Covid period.”