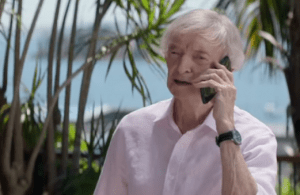 Former Australian cricket captain and commentator Richie Benaud has died just as the nation’s lamb industry heralded him as a lamb chop legend.

Mr Benaud died today in a Sydney hospice after a battle with skin cancer and the effects of a serious car accident in 2013.

“We have lost a cricketing champion and Australian icon. What an innings. RIP Richie Benaud,” Mr Abbott said.

Mr Benaud’s long-time employer, Channel 9, said he passed away in his sleep overnight.

Mr Abbott has announced this morning that a State funeral will be held in his honour.

Mr Benaud was the first cricketer to score 2000 Test runs and take 200 Test wickets, and then led an equally successful career in cricket television commentary during the alternating Australian and UK summers for half a century.

Meat and Livestock Australia said sales of lamb for the week before Australia Day were up 35.3 percent, compared to an average week, and 20.3pc for the campaign fortnight, putting it in the top two of the Australia Day lamb campaign’s 11-year history.

Running over two weeks, the ad was aired 732 times on commercial television with a reach of 6.6 million viewers.

“We are excited to see that great creative work has also delivered value back to stakeholders in the form of encouraging sales results” MLA’s Marketing Manager Consumer Programs Andrew Howie said.

“The challenge we now face is to raise the bar even further in 2016, which is a good problem to have, and continue to grow domestic sales for lamb in the lead up to Australia Day and ensure the campaign remains relevant to consumers.”

Creative recognition has started to flow in also, with “Richie’s BBQ” having just taken out the Australian Creative Excellence Showcase (ACES) Awards.