AFTER successful joint field trials completed by the Sheep CRC and Allflex Australia, the Allflex Tissue Sampling Unit has been approved for use to submit DNA samples for Parentage, Poll and Genomic testing at the Sheep CRC.

Scientific advancements in the mapping of livestock genomes, along with continued development of affordable diagnostics, has changed the DNA sampling industry.

The approval of the TSU means sampling is now easier and quicker for producers, opening the way for the use of diagnostics for a range of applications including parentage verification and genomic selection.

Allflex Australia business development manager Lewis Frost said the extensive development was required to bring the TSU to this point.

“The end result of this significant body of work is the Tissue Sampling Unit or TSU.”

The TSU can be purchased either in packs of 10, 100, or trayed with matching electronic and/or visual tags, to ensure complete animal and sample identification integrity through all good rural retailers.

“We switched from blood cards which were clumsy, time-consuming, needed scalpels, required hand and equipment washing and the recording process left room for error,” she said.

“Even with high standards of hygiene, cleanliness and data management, the re-test rate was running around 5pc.”

Since moving DNA sampling of 3000 progeny annually to the Allflex TSUs, the job has become much easier, faster, and efficient, Ms Andrews said.

“We have not had a single re-test requested from the lab due to contamination. The applicator is simple to use and easy to load, speeding up the whole sampling process. The speed of processing lambs has greatly increased as we Flock tag, RapID tag and TSU without being held up by any one process.” 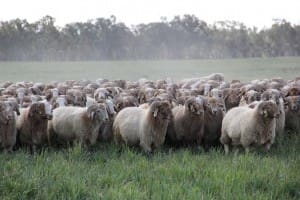 The high quality breeding operation is designed to accelerate genetic improvement using visual and performance recording, along with a complete pedigree structure.

“The other great feature of the TSU is the 2D barcode which makes recording the animal to the sample quick and error-free by matching the TSU to the animals RFID tag,” Ms Andrews said.

“There’s no more human data entry errors typing in the wrong number, illegible writing or pieces of paper splashed with blood. We use a 2D barcode scanner, an RFID stick reader and an XR3000 to record the animal ID and TSU sample number and send an electronic file to the lab.”

She said the Wet TSU was ideal for the hot environment and isolated location – being able to store and send samples to the lab with confidence that the samples would not deteriorate in storage or shipping.

“At Hassad we use uses Zoetis genetic services for Sire and Dam parentage testing and have found them terrific to deal with,” Ms Andrews said.

“We couldn’t recommend the TSU to sheep breeders highly enough. They are so much faster and easier than blood cards and certainly could not imagine going back to using blood cards. The TSU is tried and trusted.”

Matt Bell, the assistant manager at Hassad’s Raby Stud, said that since adopting TSUs, the business had been able to process 800 stud ram weaners per day through the VE machine.

“Previously with blood cards the best we could do was 200 a day. The TSU is so easy and so much quicker. The whole process is so much easier,” he said.

“Handling, storage and shipping is so easy with the Wet TSU we just put them in the esky at the yards then send them to the lab – no worries.”

“With blood cards they are messy and time-consuming and hitting the vein is hard to do every time – plus ears don’t always bleed,” Mr Bell said.

“I could never go back to blood cards.  I would rather do mothering-up than get blood from ears.”