A final section of cluster fence being erected on Glenaras, near Ilfracombe in central western Qld.

THERE’S groundswell of optimism and increased confidence in Queensland’s wool industry, according to Toowoomba based Elders Sheep & Wool Specialist Peter Sealy, and strong wool prices appear likely to remain, at least in the short term. 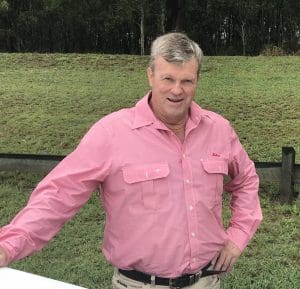 Combine this with giant swathes of cluster and exclusion fencing, where producers are once again gaining the upper hand in the perpetual fight against wild dogs, and it is easy to see why optimism is returning.

All that is lacking now is a run of widespread good seasons to rebuild sheep flocks to more optimum numbers.

Exclusion fences have allowed growers to regain control of their flocks after years of pressure from wild dogs, providing a huge source of relief where they have been completed. Some of these areas were previously over-run with dogs, causing many producers to go out of sheep altogether, but those who have remained loyal to wool are now reaping the benefits.

The fences require a significant financial investment, but once erected they have the ability to pay big dividends.

Results are already starting to appear, particularly in the Tambo region, which was one of the first areas to embrace exclusion fencing, with lambing percentages increasing exponentially, Mr Sealy said.

An obvious lesson learned through these fences is just how many dogs there were, and the hope is now that those remaining will find their previously uncontrolled freedom substantially restricted.

“Exclusion fences are becoming more and more prolific and noticeable. Where once they could be simply plotted on a map, they are now too numerous, and are going up very quickly,” Mr Sealy said.

Ongoing maintenance of these fences will be paramount however, and it will take a coordinated and conscientious approach to keep them in dog proof condition. While much of this fencing is still pristine, it may be several years before they are really fully tested.

With sheep and wool prices at current high levels and many clips now averaging well in excess of $2000 a bale, producers are taking the opportunity to steer budgets towards further fencing, land acquisitions or long needed general property improvements and maintenance.

From a benchmark price of only half this level five or six years ago, the recent rally has been nothing short of spectacular, and shows little sign of abating.

With sheep numbers expected to stay historically low, due in no small part to the transition of many traditional sheep grazing areas to cattle, Mr Sealy said the supply/demand ratio is likely to favour the grower for some time to come, and this bodes well for those who have been able to maintain their woolly interests.

Few people are better qualified to talk about the renewed optimism in the bush than Peter Sealy, given the vast area he has covered and continues to cover.

He recently took delivery of his 10th company vehicle in 20 years.

In that time he has racked up just shy of an incredible 1.5 million kilometres. This equates to about four years’ worth of driving, covering ten hours every single day.

For some people this amount of driving would be daunting, but for Peter, he wouldn’t have it any other way.

He told me he loves driving and seeing new country, learning how different operators approach their various tasks, meeting folk he’s only spoken to by phone, and gaining an insight into the various seasonal conditions, as he travels the wider part of the Sunshine state.

And there’s ample opportunity to partake in the famous bush hospitality too, as he travels around his huge jurisdiction.

At a recent ram sale at Barcaldine Downs, not only were the prices good, but Peter said he felt a genuine excitement regarding the current state of the sheep and wool industry, not to mention the meat market as well, and the longer these prices stay around the more incentive there is for growers to pump money back into their operations.

Not only that, he said there is a real sense of satisfaction among growers in what they’re doing, as if everything now is so much more worthwhile, which he says is great to see.

And the optimism is spreading through the industry.

Shearers, classers and shedhands are picking up on the new vibe as well and enjoying being part of it.

The improved market is also leading to changes in the way wool is classed.

“Classing is being simplified too, with the main objective being to create big lines of AAAM wool,” he said.

“Big clips and straight lines of similar style wool are increasingly attractive. The years of careful breeding are returning big rewards for many producers.”

With supply forecast to remain low, at least in the short term, Peter sees a real opportunity for traditional growers to build their numbers, get a few good sales under their belt and really take advantage of the current climate.

“We’re in very good shape as far as the wool market goes, and the other major commodities of sheep meat and beef are good too.”

Sitting down with Peter for a chat, it is not hard to be captivated by the excitement and enthusiasm he has for a quality fibre that has been on a rising trajectory now for some time, and could well remain at current or higher levels.

Wool prices are good, and with the wild dog problem increasingly under control, it’s now up to the weather gods to do their bit.