SOME clarity is starting to emerge over the reasons behind the surprise suspension by China of six Australian meat processing plants yesterday, and the likely short and longer-term implications. 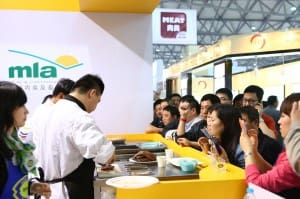 Trade minister Steve Ciobo on Tuesday received correspondence from China’s quarantine agency raising concerns over labels on some consignments of exported meat, leading to suspensions by the Administration of Quality Supervision, Inspection and Quarantine of China (AQSIQ).

The issues concerned multiple ‘breaches’, mostly relating to what Australia would consider minor issues to do with inner and outer labelling, on a very small number of cartons.

Australian officials today are working in overdrive with Chinese authorities to start a process to resolve the bans, and re-establish trade.

The issue is now being managed in two stages:

Trade sources close to the China market suggest that ‘some hundreds’ of containers of beef and sheepmeat are likely to be in transit to China, which may get caught-up in the suspension, which is effective for product with a departure date of 24 July.

“There won’t be anywhere near as much product on the water as when China imposed its surprise blanket chilled beef ban on all markets three years ago,” the contact said. “At that time, there were about 1000 containers caught up in the chilled ban, but trade with China is a lot lower now,” he said.

The most immediate problem in this week’s suspension was managing that Australian beef that was currently in transit.

Adding complexity is the fact that of the six plants that were knocked-out yesterday, five have chilled beef eligibility to China, meaning a much tighter time-frame to resolve access issues for that product in transit, or find an alternate market. Most of the product from a grainfed plant like Beef City currently in transit is likely to be in chilled form.

In fact, yesterday’s announcement knocks-out close to half of Australia’s entire (albeit still modest) list of plants eligible to ship chilled beef to China.

Another issue to emerge is the fact that other businesses, apart from JBS, TFI, ACC, Kilcoy and NCMC may be impacted by the decision. That’s because a number of smaller non-packer exporters who get service kills carried out at NCMC Casino, who target the China trade, may also be bound-up in the suspension, Beef Central was told.

Yesterday’s announcement could be “very, very disruptive” to those smaller businesses, contacts said.

Several outcomes are possible for Australian beef currently on the water to China from the six suspended plants:

Much will depend on the tone of background discussions between Australian and Chinese authorities as too how soon progress is made. After the chilled beef market closure affecting all exporters in 2013, New Zealand approached its negotiations with China over re-entry with what was described as an ‘assertive’ style. It paid an enormous price – only regaining access for a handful of plants in the past few weeks.

Once the issue of how the product on the water from the six suspended plants is resolved, focus will swing onto resolving China’s broader concerns which led to the suspensions.

Some of the issues identified by the Chinese would be regarded as ‘minor’ in Australia, such as inner-labelling within cryovac bags exactly matching outer labelling, on a handful of cartons.

One of the six companies involved in the suspension is now off the China eligible list, because one cryovac bag containing one beef primal, did not have the inner-label inserted – in a consignment numbering more than 700 cartons.

In the meantime, Beef Central understands that all other China eligible beef and sheepmeat exporters in Australia still engaged in trade have re-doubled their level of scrutiny over meeting labelling and regulatory requirements, to avoid the prospect of further suspensions.

While China’s approach over labelling to some in Australia might appear pedantic, it must be remembered that product substitution is not uncommon in China, especially through the influence of the grey trade. It means China is meticulous in paperwork and documentation, and sees alignment between inner and outer pack labels as a critical part of that. Any discrepancy between the name of the plant and what’s on the health certificate or bills of lading, for example, can attract close attention.

How long will the temporary suspensions last?

Anybody’s guess, but it could range from days to many months, depending on the progress made in initial discussions in coming days, or whether China insists on a series of Australian plant audit visits, for example.

The Australian Meat Industry Council issued the following brief response to the development this morning:

AMIC understands the suspensions are effective for product with a departure date of 24 July 2017 or thereafter.

Australia takes China’s concerns seriously. AMIC and the Department of Agriculture and Water Resources are working together to provide a response to AQSIQ to address their concerns as quickly as possible.

A Department of Agriculture statement said Australia was a trading nation and agricultural trading relationships were important to its economy.

Australia and China had a strong bilateral trade relationship, it said.

“Australia values its reputation as a reliable exporter of high quality agricultural products, and we take our obligations to meet importing country requirements very seriously,” the statement said.

The Department was working with industry and Chinese authorities to resolve the matter urgently.

“I have been engaging today and will continue to engage with Chinese authorities and the Australian embassy to try to resolve this matter as efficiently as possible.”