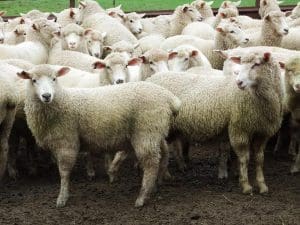 Over-the-hook rates were also lowered in most states this week, but processors then paid higher carcase weight prices in saleyards, with rates more consistently over 550-600c/kg for all new season trade and heavy lambs.

In NSW, Victoria and South Australia mostly keen trade and processor buyers competed for quality young lines, and were forced to top up with old lambs, especially when quality was suitable.

At the Dubbo saleyards on Monday, the National Livestock Reporting Service said trade lambs lifted $7-$10 and this trend continued at Tamworth, Corowa and Forbes

At Bendigo on Monday, new season lamb prices rose $5-$15 and rates for an improved offering of grain-fed old lambs lifted by up to $25. Ballarat’s new season lambs were $5-$10 dearer.

The NLRS said sheep and lamb numbers were down considerably after last week’s rain. It was a good quality yarding with a good selection of trade and heavy weight lambs, and fair numbers of lighter weights and Merinos.

The NLRS said lamb numbers decreased due to access issues, combined with supplies of old lambs declining seasonally. Quality was mixed in the old trade lambs. Not all major domestic buyers were present or active.

It was a mixed quality offering of sheep with several excellent pens of heavy ewes. Not all buyers were present and competition was weaker. Heavy weight crossbred ewes made to $125 and Merino ewes sold to $118.

The NLRS said it was a good quality yarding of lambs with most well-finished and mainly off crops. There were some good runs of heavy and extra heavy lambs, and trade weights were well-supplied.

The market was firm to stronger for most classes of lambs. Restockers were keen to acquire lambs to go on to crops. The sale incorporated the annual J.L. Goodwin memorial shield, lamb show and sale. The champion pen of 20 lambs yarded by the Barton Partnership sold for $400 and the proceeds were donated to the Westpac helicopter appeal.

The NLRS said despite flooding in the drawing area, numbers remained fairly steady. Agents yarded 15,800 fair quality new season lambs penned and there were good numbers of well-presented finished lambs. Trade and heavy lambs were well-supplied. Extra buyers competed in a firm to dearer market, particularly on the lighter lambs.

The sheep were mostly Merinos and quality was similar to previous sales. Prices were firm to $4 dearer with Merino ewes selling from $80-$140. Crossbred ewes made $85-$129 and Merino wethers $83-$123.

The NLRS said fewer old season lambs came forward. The quality and presentation of the young lambs was very good, although there were fewer heavy weights and most were trade weights.

The bigger yarding attracted more processor competition, with all the major domestic companies competing on lamb. Like other recent markets, the sale benefited from the widespread rain which has disrupted the movement of slaughter stock to abattoirs.

Prices for the best young lambs were noticeably dearer, while the lighter types sold firm to a few dollars dearer when compared to the previous sale. Prices for young lambs reached a top of $181 for a small pen lot of heavy export lambs. It was the only sale at this level, with the next best price being $164.

Most of the lead drafts of young lambs suiting domestic orders sold from $130-$155 at around 590-620c/kg carcase weight. Lighter young lambs sold to slaughter made $107-$126. Some small and immature lambs sold very strongly at $80-$104 to local and Birchip restockers. The selection of old season lambs was very mixed with a lot of small clean-up lots. Prices for the best domestic and export slaughter bodies lifted as buyers attempted to fill orders.

The sheep were mostly Merino ewes, with sheep off-shears starting to present in very good condition and plenty of weight due to the favourable season. Processor demand for sheep remained very buoyant, with the best mutton making an estimated 380-420c/kg cwt. In dollars per head terms, most of the bigger-framed and heavy ewes sold from $80-$120, with odd sales to $130.

The NLRS said the lamb market showed a much dearer price trend, amid reports recent rain has held up kill supplies, particularly in NSW. Some companies were transporting lambs immediately for same day slaughter. One export company which gave only limited support to lambs last week was much more active, helping lift price rates across the yarding for heavy slaughter pens.

Prices for young lambs were $5-$15 dearer, while an improved line-up of old season lambs, including some pens of shorter-skinned types off grain, lifted by up to $25 when compared to the discounted results of recent markets. Heavy young lambs sold to a top of $175 and there were four sales above $170 to exporters.

The main drafts of heavy trade weight young lambs sold from $143-$167 as carcase weight averages pushed back over 600c/kg cwt. Light weight young lambs went to slaughter at $110-$130 and also averaged over 600c/kg. There was some restocker interest from Birchip and the local Bendigo area, but the supply of suitable young lambs was limited to a few pens which sold strongly on size at $90-$104.

Competition for old season lambs intensified as buyers attempted to fill orders. Prices across all weights and grades improved, with the best slaughter types returning over 600c/kg. Pens of heavy old season lambs sold from $140-$175.

Bare-shorn crossbred ewes accounted for most of the lift in sheep numbers. Sheep are now starting-present off-shears with plenty of weight thanks to the favourable season. Mutton prices tracked in a similar range to last week. Heavy crossbred ewes sold from $110-$128, and heavy Merinos made to $125. The main runs of trade weight Merino ewes, most off-shears, sold from $75-$104 to average around 400c/kg.

The NLRS said lamb quality was very mixed and more buyers attended showing an urgency to obtain numbers for orders.

Prices lifted $5-$10 for the increased average to good quality new season lamb offering, though there was limited number of heavy weights. Most older lambs sold $4-$11 stronger, making up to $170. Restockers paid $109 for young lambs and $69-$85 for Merino lambs.

The NLRS said the usual trade and processor buyers attended along with a larger number of restockers and feeders, making prices fully firm on last week.

The NLRS said the usual buyers and some extra competition operated in the generally dearer market. Quality was average to good, with more new season young lambs yarded.

New season lambs sold to $150, or around 600c/kg for the heavier trade weights. Restockers paid from $74-$86 for light weight young lambs.

Muchea lamb prices fall by up to $10

The old season lambs were of mixed quality with many secondary, tail-end drafts, and a reasonable number of Merino drafts. Old light weight lambs made $50-$89, trade weights sold from $78-$106 and heavy drafts made $96-$111. Most old season lambs sold $5-$8 cheaper, with odd pens back by as much as $15. Better old season lambs made close to 440c/kg.

Ewes, wethers and rams maintained values under solid competition. Light weight ewes sold for $45-$60 and the medium weight processor drafts made $65-$90, up to $5 dearer. Heavy ewes made $75-$100 to be firm to $1 dearer and averaged close to 310c/kg. The dearer ewes, including some drafts sold to restockers, had close to full wool. Restockers paid from $70-$94 for younger drafts with mature lines selling to $106.

At the northern Tasmanian saleyards at Powranna and Killafaddy on Tuesday, the agents yarded 750 lambs, 220 more than last week, and 250 sheep, 60 more.

Most of the lamb numbers were light or very light export or restocker types with very few good quality trade lambs available. There was limited export and trade competition and most prices were $3-7 cheaper.

Most of the sheep were bought by a regular Victorian exporter, although light Merino sheep went to restockers. Restockers paid $50-$63 and exporters $50-$73 for light sheep and $60-$87 for medium weights.