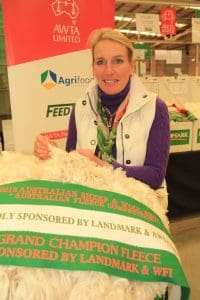 Stud principal Georgina Wallace said the fleece came from the stud’s junior champion ewe at the Australian Sheep and Wool Show in 2017.

On her return home to Ross in Tasmania’s Midlands, the horned ewe cut 11kg of 19.1 micron wool as a two-year-old. The fleece also won grand champion fleece at the Campbell Town Show in May this year.

“This result goes to show that the stud has consistency and more depth and I am breeding a true type,

“This result is very pleasing and I think it goes to show that the first time wasn’t a fluke,” Mrs Wallace said.

She said the previously Saxon superfine blood stud had been infused with genetics from Langdene and Nerstane genetics. Trefusis has also bought some poll rams to start a poll stud.

“The ewes weren’t cutting enough wool and they weren’t productive enough so we decided we needed to lift our fleece weight, our body size and lambing percentage.

“We’ve managed to do all that in eight years,” she said.

As a Saxon flock, the ewes were cutting about 4.5-5kg annually and the ewes this year have just 7kg, and fibre diameter has not changed much from 17.5-18 microns.

“We’ve just shorn the ewes and I think the clip averaged 17.8 micron.”

The flock’s lambing percentage at marking has increased from about 80-85 percent to 110pc. Ewe liveweights, have increased but Mrs Wallace said there is still room for improvement.

“My message to people is, ‘don’t be afraid to change and try something different’, the genetics are there.

“Go and buy a different ram — it has to be suitable to your climate and your farm – and put him over some ewes and see what happens.”

Trefusis ram sales are increasing. Rams have been sold in Bendigo and the stud will take a pen of five rams to Hamilton’s Sheepvention for the first time this year.

“There has been a big swing away from Merinos, particularly in Tasmania and Victoria – Merino numbers have increased in Western Australia and South Australia and New South Wales – which limits your market.

“So I’ve decided to hit the road again and hit the boat again.

Fleece competition convenor Candice Corby from Landmark said of the 28 major awards given this year, there were 24 different exhibitors. Entries rose about 7pc to 446, with all wool-growing states represented.

Ms Corby said Trefusis was the first exhibitor to win the competition’s major award three out of four years – this year, in 2017 and in 2015.

The most valuable fleece was a 14.8 micron fleece from Phil Venning, Clare, South Australia, valued at $173.39.

The Trefusis stud later won the coveted Lionel Weatherly trophy at the show for the first time with three rams and two ewes of the 10 sheep shown at Bendigo.