Sheep Central has been told that the current high prices and dwindling lamb and sheep supplies has led at least one NSW processor to consider reducing kill days in coming weeks, although the timeline for this could not be confirmed.

At most eastern states saleyards this week, restocker, trade and lamb prices moved upward to put pressure on, or exceed, processors’ spot and contract over-the-hook prices.

More extra heavy lambs are tipping the $300 mark at centres in New South Wales, Victoria and South Australia. At Dublin’s South Australian Livestock Exchange yesterday extra heavy lamb prices rose by up to $20 to set a state record price of $300, up $4 on the previous SA top price set at Naracoorte in May last year.

With lamb supplies expected to decline dramatically in coming weeks, kill space opening up at processors, fewer lambs in paddocks and new season numbers forecast to be reduced and later, price pressure is being maintained on Merino and crossbred lambs in all carcase weight ranges.

Restockers are continuing to compete on light and medium trade weight lambs, and domestic processors are competing with exporters on heavier lambs, sometimes up to 26kg cwt. Supplies of heavier lambs are expected to decline quickly next month as drafts age closer to cutting their permanent teeth.

The week’s early price movements also continued at the Horsham saleyards today, where the NLRS reported extra heavy lambs reaching a new centre record of $301 and the medium trade weights, 22-24 kg, selling from $198-$231. All crossbred lamb lines weighing more than 20kg cwt sold above at or above 800c/kg. More lines trade and heavy weight lambs made more than 900c/kg cwt, with the 22.1-30.1kg lambs making 790-946c/kg and lambs over 30.1kg ranging from 720-839c/kg.

The NLRS said prices lifted at Hamilton today, $10 to $20 for lambs and from $15 to $20 for sheep, with many of the medium to heavy weights in both gaining the best of the rises. 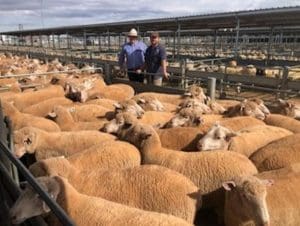 VC Reid and Son auctioneer at the Forbes saleyards, Scott Reid, said the agency sold 40 Poll Dorset cross lambs for $305 yesterday for Tullamore producers, Kevin and Robyn McMahon and son Ross. The lambs averaged 85kg liveweight and were estimated to have a carcase weight of 42kg with a skin value of about $10. The McMahon’s second run of 190 lambs sold for $280.

Mr Reid welcomed the high prices but was concerned they would become unsustainable for processors.

At the Ballarat saleyards, TB White and Sons auctioneer Gerry White sold 180 Poll Dorset cross lambs from Andrew Maher of Carlisle Farms, Dean, for $300 to the Australian Lamb Company. The 11-month-old lambs were estimated to have a carcase weight of about 43kg and skin value of $8-$9, bringing them out at about 680c/kg cwt.

Mr Maher said it was a great price for this time of the year.

“It’s really good to see all the farmers in this exceptionally dry year and conditions are benefiting and getting rewarded for their efforts.”

He has been finishing his lambs on lucerne, “with good shade and good water”.

“I’ve got a few more to come, I’ll bring some big ones in next week – I’ll bring the heavy ones, these are my light ones.”

“I thought the heavy trade and trade lambs might have been up $5-$6.

“Ballarat will yard a number of (heavy) lambs for the next 4-5 weeks, then after that numbers will drop, but it is a credit to them to get them up, it’s been dry.” 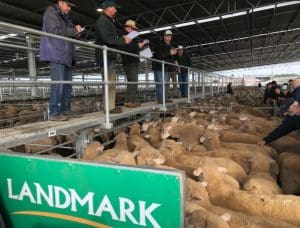 Selling after TB White and Son, Landmark Ballarat livestock manager and auctioneer Xavier Shanahan also equalled his $300 top price from last week with 68 grain-fed lambs from the Westbrook Pastoral feedlot at Loxton, after buyers resisted efforts to bid above his starting price of $310.

He said the market was fully firm with strong demand for export lambs and “a fair presence” of restockers, bag lamb exporters and supermarkets on light and trade weights. Mr Shanahan expected numbers to become “thin on the ground” in June.