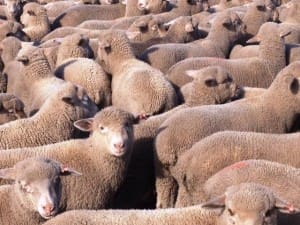 TRADE and heavy lamb prices rebounded in New South Wales this week as rain disrupted supplies to saleyards at Dubbo, Forbes and Tamworth.

Elders NSW livestock sales manager Paul Jameson said wet weather over the weekend reduced Dubbo’s yarding on Monday from the much higher draw on Friday, and Forbes had similar issues though to a lesser extent.

“There was just a bit more demand, probably on the back of some pretty awful weather for a few days.

“It will be very interesting to see what numbers come forward at Dubbo next week and you may see some of those gains retreat with a more normal yarding.”

Mr Jameson said the season had been good for producers with early new season lambs to get them off at good weights.

“You are also seeing a percentage of producers grab what is deemed to be a pretty reasonable rate for a light sucker, you could even call them a store, if you like.

“Some are saying we will take a bit of that and run a few through to spring and see how we go.”

Mr Jameson said good export demand for light suckers is also underpinned by some restocker demand from producers diversifying from putting cattle onto crops or pastures to lambs and sheep.

“There are a few people starting to diversify their thinking in terms of trading opportunities and those light lambs are one option for them.”

Landmark Bendigo auctioneer Richard Leitch said early weaning of new season lambs into saleyards was “rife” in the area due to the season.

“Very immature lambs are being weaned because they are dragging the guts out of the ewes and the ewes haven’t got a lot of milk left anyway – so a lot of lambs being weaned.”

“We just haven’t had the rain and despite the rain on the weekend, it is just too cold; we won’t get growth until the end of August.”

Mr Leitch said he was predicting a very short, sharp sucker season for the area.

“Then we are going to be selling a lot of store lambs.”

The terrific mutton and lamb market was “the saving grace” of the situation, he said.

Mr Leitch said Bendigo would have yarded about 10 pens of genuine suckers on Monday, but he believes that is going to build up over the next two weeks, with a 17-18kg cwt lambs making around $130.

“Anything that has got bloom on it, we are just drafting them off and in they will go.

“Our season has been shocking, and if we don’t continue getting rain, we won’t even get a spring, that’s how bad we are looking.”

Elders Bendigo livestock manager Nigel Starick agreed the area’s sucker season would be short, and areas west of Bendigo and into the Wimmera were also suffering due to lack of rain.

“A lot of blokes are looking at weaning early, then either selling the best of them or shearing.

“Those who have finished lambs in feedlot will do that – a lot are still feeding ewes and lambs anyway.”

After the close of Tuesday’s saleyard sales, the National Livestock Reporting Service quoted improvements in all the Eastern States Daily Indicators for lamb, especially restocker and Merino lambs.

The ESDI for mutton is down two cents to 386c/kg and the national indicator lost three cents to close on 385c/kg.

In NSW, the NLRS said over-the-hook lamb rates were unchanged this week. Merino lambs were marginally lower, while mutton rates across all weight ranges were firm. It is expected that supply will tighten this week, due to the cold conditions.

In Tasmania, OTH rates for sheep and lambs were unchanged. The rates for Western Australia were unavailable when this report was published.

The NLRS said the wet wintery conditions reduced the yarding considerably from the expected draw and quality was mixed. Lightweight lambs were well-supplied, and there were good runs of trade and heavy weights. The usual orders competed in a dearer market.

The NLRS said only a small portion of the 4600 sheep and lambs drawn for were yarded. The good quality penning of lambs came mainly off crops and consisted of several pens of heavy and trade weights. The market was generally firm to slightly easier for most sales. Prices for the small penning of mutton saw little change, though there was some good heavy mutton offered.

The NLRS said lamb quality was fair, with good numbers of well-finished lambs and a few plainer types. Most were heavy and extra heavy lambs, with a handy penning of Merinos. The usual buyers competed in a market that regained all of last week’s drop.

The NLRS said there was a slight decline in lamb numbers, but a noticeable increase in sheep supplies amid reports the tough season is prompting farmers to wean lambs early and turn-off older ewes to preserve feed and water supplies.

Lamb quality remained very mixed and generally plain, with a lot of small pens from producers clearing tail-end drafts. The regular processing companies were represented, but most buyers didn’t operate at capacity.

Prices fluctuated, with the limited numbers of quality trade and supermarket style lambs unchanged to a few dollars dearer in places. Secondary slaughter lambs mostly showed a slightly softer trend of $1-$4. The market reached a top of $186 for a small pen of extra heavy export lambs.

A few new season lambs were penned, but only in small numbers and insufficient to build an accurate picture of demand or price trends. Plainer lambs dominated the yarding, with secondary trade weights generally selling from $112-$130, or mostly 530-570c/kg cwt, although selective bidding on small and mixed pens created a wide price range. Light slaughter lambs mostly sold from $72-$96. Most agents penned lightweight Merino lambs and most made $60-$103, with odd pens of better finished trade weights to $116. The best competition was for nicely presented 22-26kg cwt lambs in shorter skins that suited the top-end domestic kill orders. These lambs sold from $141-$169, at an estimated 600-630c/kg. Competition remained subdued for the odd pens of heavy export lambs which sold to $186.

The sheep yarding included a good mix of heavy weight crossbreds and to light Merino ewes. Not all the regular export buyers competed. Prices fluctuated, with heavy sheep showing a slight price correction, while some of the plain conditioned light types were a few dollars dearer. Heavy crossbred ewes sold from $106-$138, while longer wool Merino ewes sold to $120.60. The general run of mutton sold from $60-$88. The best lines of Merino sheep made an estimated 390-420c/kg cwt, with an average run of sheep estimated at 360c/kg.

The NLRS said quality was average in the typical winter yarding. Most of the regular buyers attended but operated selectively in cold conditions and lambs generally sold around last week’s levels.

The NLRS said the very mixed quality crossbred and Merino lambs sold to erratic bidding from the usual local and interstate trade and processor buyers. Feeders and restockers were conspicuously quiet, but operated on very light weight crossbreds and Merinos.

Note: No NLRS report was filed for Naracoorte due to the dispute with MLA over reporting costs, although agents said there were insufficient sheep and lambs to accurately quote price trends. The Naracoorte agents meet this Thursday after the store cattle to decide the future of NLRS reporting at the saleyards.

The NLRS said numbers lifted as dry conditions continued. Lamb quality was mixed and a large percentage were tail-end drafts with many lighter weights. Prime lamb supplies were moderate. Buyers were cautious this week with some processors undertaking maintenance and direct-to-works deliveries solid. Live export buyers were active on suitable wether and ram drafts but feeders remained cautious.

Prices for prime lambs remained close to firm but all secondary lambs dropped in price by at least $5. Light store lambs, mostly Merino drafts, made $50-$66 to remain firm. Light lamb prices paid by feeders, air freight processors and restockers slipped to $60-$89. Trade lamb prices also fell by close to $7, but rates for the prime drafts were close to firm. Merino and secondary lamb draft prices were significantly easier. There were also solid price drops for heavy lambs, with these making $103-$133.

Heavy weight ewe supply improved and some good wethers were offered. Ewe sales improved as competition returned to more normal levels. Ewe prices firmed with the return of a major processor and light weight drafts made $40-$60. Most 2 score processor mutton sold from $50-$82, with better conditioned and heavier weight drafts making $68-$102, or close to 310c/kg cwt.

Restockers also purchased younger sheep drafts for $60-$101, with most slightly dearer. Wether drafts were dearer, but quality contributed. Export weight drafts made $80-$112.50, to be up to $5 dearer. Lighter weight and conditioned wethers to restockers sold from $70-$99.50 and were up to $5 dearer. Ram sales remained solid with lambs making $65-$95, and young drafts selling to live export and export feeders for $40-$85. Old rams sold to processors for $10-$65.

At the Northern Tasmanian saleyards on Tuesday, the agents yarded 870 sheep, 680 fewer than last week, and 600 sheep, 200 more.