Wool auctions are to cease at the Brooklyn Wool Centre in Melbourne.

MELBOURNE’S wool auctions have been ordered out of the Brooklyn selling centre as part of Victoria’s Stage Four COVID-19 lockdown.

Sheep Central has been told the industry is currently seeking government approval to relocate the auctions to another location, possibly in Lara, between Melbourne and Geelong.

The weekly Melbourne wool auctions are held at the AWH Brooklyn Wool Centre close to a number of COVID-19 outbreaks in west Melbourne.

Mr Cother advised that the department information is that wool trading should be handled ‘remotely’. He said discussions with the department are continuing re the classification and whether open cry auctions could be held on the showfloor or at Lara.

If these proposals are not accepted, NASC will be seeking input from brokers on their preference of alternative methods for next week’s sales, Mr Cother said. These options would include either having wool auctioneered in Sydney, via Zoom or on one of the online platforms, AuctionsPlus or WoolQ.

Mr Cother said is alternative selling methods are required, the M08 (next week) selling arrangements would be restructured to reflect the change in situation, including more days.

In a further update this afternoon, Mr Cother advised the Victorian Government had not finalised its advice on the permitted industry status of open cry wool auctions in Melbourne as part of the Stage Four lockdown.

He said the NASC met twice today and at its 1pm meeting resolved that if advice is received at close of business Monday that the auctions in Melbourne are accepted as a permitted activity, then next week’s M08 sale would proceed as advertised on Tuesday and Wednesday. Otherwise, M08 would be re-scheduled as a three-day Tuesday-Thursday online open cry sale via Zoom.

Sheep Central has been told brokers and buyers favour continuing physical auctions at another location due to the speed required to clear wool under the current restrictions. Increasing quantities of wool are expected to enter auctions in September/October as seasonal shearing escalates. 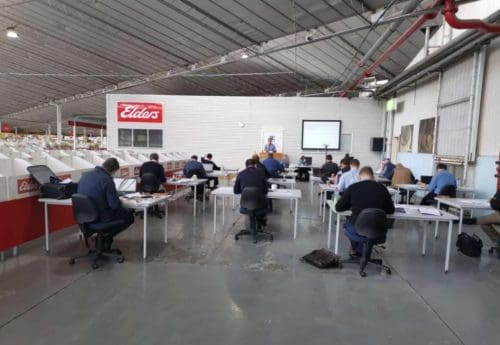 Melbourne brokers moved auctions onto the showfloor and implemented strict social distancing rules in March. The number of buyers, brokers and sale administration staff was also limited. Auctions were limited to Tuesday and Wednesday sales with a limit of 1000 lots per room. AuctionsPlus and WoolQ have been holding weekly sales since April this year.

Executive director of the Australian Council of Wool Exporters and Processors, and the Private Treaty Merchants of Australia, Dr Peter Morgan said the industry has done a fantastic job of establishing procedures to ensure social distancing at wool auctions.