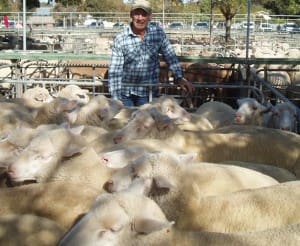 Despite the impact of Easter on sales, agents believe this week’s lift in exporter, domestic processor and restocker competition might indicate an earlier than expected shortening of lamb supplies, especially for quality trade lambs.

In NSW, producers forced to off-load lambs because of dry pasture conditions and failing stock water were rewarded with good competition on even secondary lambs, despite boosting Wagga’s yarding by 6000 to 31,000 lambs.

JM Ellis auctioneer Robert Pike said with no market in Hamilton next week, buyers were shoring up lamb supplies.

“It changed in a fortnight, two weeks ago everyone had plenty of lambs then all of a sudden they all want lambs for this week – so I would say there is a bit of shortage.”

He said it was difficult to book lambs into works for the past two weeks.

“You look at Bendigo they had 7500 less lambs, Ballarat had about 7000 less and we had less lambs, so all of a sudden you get the feeling there is probably not the numbers of lambs out there that they thought.”

But Mr Pike said if lamb prices got back to 600c/kg cwt or better, “everyone gets the shakes”.

“And that’s the processors plus the people that are buying them – your average person in the supermarket has only got so much to spend and there are lots of alternatives like beef, pork and chicken.

“It gets to a stage where lamb gets a bit expensive and people change their minds and do other things.”

Riverina Livestock Agents director Tim Drum said buyers at the Wagga sale this week were preparing for Easter and for any forward supply shortages.

“I think the supermarkets have got enough at the moment, but the exporters might getting caught up a little bit.

“There was a big gap in the lambs yesterday, they were either outstanding or they weren’t much chop.”

“I think we are starting to see a shortening in supply, of decent lambs anyway.

“In this area there are a lot of people running out of water.”

“They are going to be the shortest.”

He said the Wagga lamb yarding was boosted by producers forced to turn-off lambs because of water issues, chasing the higher prices and conscious of the lack of a sale until April 9.

“The market isn’t too bad for this time of the year.”

Nationally, the NLRS indicator for trade lambs climbed seven cents to 525c/kg and the heavy lamb indice closed on Thursday at 529c/kg, up four cents. The national mutton indicator was up seven cents to 339c/kg.

The NLRS said it was a mixed yarding of lambs with some top heavy weight lambs, a fair percentage of lightweights and limited ideal trade weights.

Lamb numbers increased substantially and quality was quite good in all categories. Trade lambs were in reasonable supply with good numbers of young shorn supplementary fed lambs.

Well-shaped trade lambs were keenly sought by several domestic processors, while plainer lambs lacking finish or presenting dry in the wool also sold to strong demand. There was increased domestic competition, though not all major export and domestic buyers operated. Bidding strengthened as the market progressed for well-finished light and medium weight trade lambs, which was aided by stronger demand from select butcher orders and other domestic processors who have returned after a short absence.

Most of the heavy trade lambs averaged 543c/kg cwt, reaching a top price of $138. The 20-22kg cwt trade lambs were keenly sought by most domestic processors, with prices lifting $7 to average $124.60. Light weight plain lambs sold to spirited competition from processors, resulting in a dearer trend of $5-$7. Well-bred secondary lambs to turn-out sold to fewer store orders to average $94 and lambs to feed on reached a top price of $107.

Heavy export lambs were well-supplied, with plenty of lambs weighing more than 30kg cwt. Competition was very strong from northern and southern export buyers, who were all keen to acquire a market share. Heavy lambs made from $135-$148, to average from 532c/kg cwt. The bulk of the extra heavy lambs sold from $145-$184, averaging 518c/kg cwt.

Mutton numbers quality was very mixed, with all weights and grades represented. Merino ewes suitable for the trade were well-supplied and sold $8 dearer, from $72-$116. Heavy sheep were in short supply and all export buyers operated fully across this weight category. Heavy ewe mutton sold $6-$7 higher to average 359-383c/kg cwt. Heavy Merino wethers sold up to $20 dearer, from $112-$121, to average 402c/kg cwt. Heavy crossbred ewes made from $105-$128. There will be no sale next week due to Easter.

In Victoria at the Hamilton saleyards on Wednesday, the agents yarded 10,229 lambs, 886 fewer than last week.

The NLRS said it was a better yarding of finished lambs, with most 18-24kg cwt, in the 3 and 4 score range. The usual buyers were active with more enthusiasm, creating a dearer trend as bidding remained strong throughout the sale. Restockers did make purchases but found it harder to obtain numbers competing against the processors.

The best hoggets made from $100-$105. This was the last week of split lamb-sheep sales in Hamilton for the year and there is no sale next week due to Easter.

The NLRS said lamb quality was mixed. The usual buyers attended and operated strongly on the better presented trade and heavy lambs. Prices rebounded to be from $5-$10 up on last week and more in places.

Hamilton sheep up to $4 dearer

At the Hamilton saleyards on Thursday, the agents yarded 5736 sheep, 355 more than last week.

The NLRS said it was a mixed quality yarding of mutton. The usual processors were present, though some of the heavier export buyers did not operate. Half the yarding consisted of medium weight 2 to 3 score sheep, with some good lines of Merino wethers and ewes. 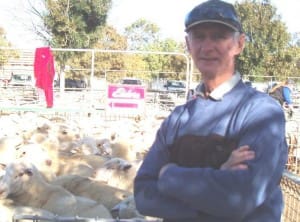 At the Ouyen Livestock Exchange on Thursday, the agents offered 10,295 lambs and 2070 sheep.

The NLRS said the usual trade and processor support was present and an additional order added strength to the restocker section. Large numbers of lambs in store condition were offered and prices fluctuated. Lightweight lambs to the trade ranged from $58-$96 and stronger restocker buyers purchasing a large number from $42-$108. Merino lambs sold from $54-$71, with the lighter weights being up to $6 easier. Trade weight 2 and 3 score lambs ranged from $97-$120 at an average of 495c/kg cwt. The few pens of heavy 4 score lambs ranged from $121-$155, up to $7 dearer in places. Hoggets mainly sold from $82-$94, with some wethers making $96 and rams to $20. Only a small number of ewes came forward. The lighter types sold from $42-$46 and the heavier ewes made $86-$90.

The NLRS said mutton quality was better with a greater selection of very heavy ewes that sold for as much as $10-$15 above last week’s rates. Competition was very solid from a full field of buyers and was reflected through the prices which rose for most of the yarding.