Australian-approved abattoir in Qatar from Animals Australia on Vimeo.

AUSTRALIAN sheep have been banned from a Qatari abattoir after alleged breaches of the Exporter Supply Chain Assurance System (ESCAS) were reported.

A Department of Agriculture and Water Resources statement said it was investigating new information including footage provided by Animals Australia on April 9 2018, alleging breaches of the Exporter Supply Chain Assurance System (ESCAS) in Qatar.

“The allegations include apparent on-selling of sheep to private buyers from the approved supply chain, and mishandling of sheep at an ESCAS-approved abattoir in Qatar.

“Supply of animals to the abattoir was immediately suspended and any animals already at the abattoir have been removed,” the DAWR statement said.

“In effect, this means no further Australian sheep can be transported to or slaughtered at this abattoir.

“This is the first complaint the department has received about sheep exports to Qatar since the roll-out of ESCAS in 2011,” the DAWR said.

Since March 1 2018, Animals Australia has provided reports about non-compliant handling of animals in three markets and allegations of sheep outside their approved supply chains in five markets in the Middle East, the department statement said. 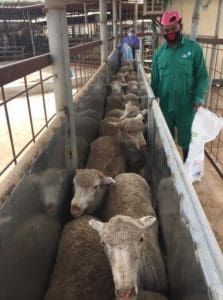 An improved race was installed and signage placed around the facility. Inappropriate equipment was replaced with suitable handling methods, including use of plastic bags to move sheep. The improvements are being trialled while the facility remains closed, ahead of an audit, ALEC said.

ALEC said DAWR provided evidence on April 10 to the exporter about apparent ESCAS breaches at the abattoir in Qatar. The offending livestock attendants in the video were identified, removed from the job site and reprimanded.

ALEC said the exporter directed their Middle East Supply Chain Consultant (SCC) to Qatar who arrived late April 10. On April 11 work began on an improved raceway leading into the abattoir which would improve the flow of animals and reduce the risk of welfare being compromised. Improved design tested while abattoir remained suspended.

The consultant collected and destroyed any non-compliant handling equipment (ie sticks, plastic pipe etc). Suitable livestock handling aids recommended – including the simple but effective use of plastic bags waved or flapped in the air to encourage the movement of sheep, ALEC said 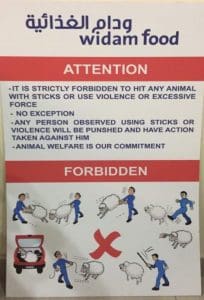 Signage has also been installed as a reminder of penalties and punishment that apply for bad welfare and handling practices including the use of any unapproved livestock handling aids.