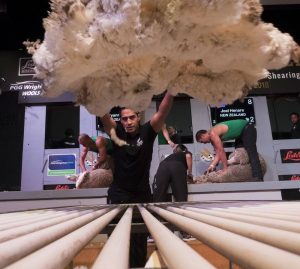 It may have taken more than 30 years, but a wool handler was the genuine star of the final night of the 58th Golden Shears in Masterton on Saturday night as ultimate rousie Joel Henare overshadowed the performance of shearing phenomenon Rowland Smith.

The two each lived up to the tag of hot favourites for their successful defences of the open wool handling and shearing titles, but Henare just went one step better, scoring his 100th open class wool handling win, at the age of just 26.

An emotional Henare stood as he was saluted with the powerful Ngati Kahungunu haka Tika Tonu and presented with a commemorative cake, by mum Greta Davoren and fellow wool handlers Candy Hiri and Nicole Petuha.

It was with similar emotion he paid tribute to some of the tutors he had in his younger days where he grew up around the wool sheds of Otago – including late former Golden Shears open champions Joanne Kumeroa and Gina Nathan.

Henare, from Gisborne and mainly of Ngati Porou heritage, said he plans to defend his New Zealand championships title in Te Kuiti next month and follow other top shows next year in the hope of defending his world title in France in July 2019. However, he has taken a job in a Motueka fish processing plant, and is no longer working fulltime in the wool industry.

Despite Henare’s success, the 31-year-old Smith, from Maraekakaho, near Hastings, was hardly any less impressive, becoming the third most successful shearer in Golden Shears open final history, with five wins in six years, behind only Sir David Fagan’s 16 and Snow Quinn’s six.

Astoundingly it was his 36th consecutive win in open class finals in New Zealand, during which the only blemish was being eliminated from one competition in a semi-final.

He was put under pressure by Pongaroa farmer David Buick in the 20-sheep final, with Wairarapa’s biggest hope of a first Golden Shears Open title for the host region looking a distinct possibility as the pair finished the race almost together.

Buick was first to the button in 16min 29.618sec, and had the better points in the judging on the shearing board. It was left to the judging in the pens, with many surprised Smith had ultimately won by more than two points.

Reigning world champion John Kirkpatrick, of Napier, unloaded another “burden” when he won the PGG Wrightson Wool National Circuit final for a second time, meaning he and Smith will again be in the New Zealand team for next season’s trans-Tasman test series.

However, with teammate Nathan Stratford, of Invercargill, Smith and Kirkpatrick were heavily beaten by Australians Shannon Warnest, Daniel McIntyre and Jason Wingfield in a test match tonight, although Kiwi wool handlers Henare and Maryanne Baty balanced the international ledger with a win over their counterparts, Melanie Morris and Sophie Huf.

More than 20 titles were decided during the three-day championships which attracted almost 400 competitors.

RESULTS from the 58th Golden Shears international shearing and woolhandling championships in the Masterton War Memorial Stadium on Thursday-Saturday March 1-3, 2018: