WoolQ’s reinvention from cost analysis to selling to traceability 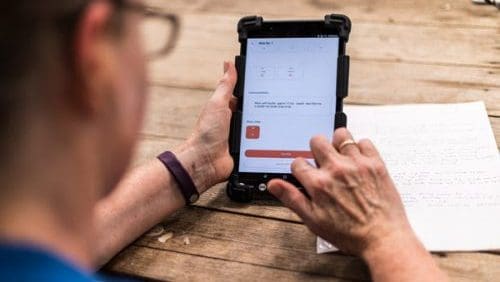 AWI is reinvesting WoolQ around traceability.

AUSTRALIAN Wool Innovation’s online wool selling service is “on hold”, but its WoolQ platform is focused on establishing itself as a “foundation piece” for traceability, a webinar was told this week.

“WoolQ itself is acting as this foundation piece for traceability by connecting to other foundational pieces like WoolClip, getting the test data back there,” AWI traceability manager Mark Scott said.

“We’re looking at how that can behave and connect to some of the other investments we’ve got.

“So with our Woolmark licensees, we are working with a company called Everledger on a blockchain chain of custody platform that collects information from every player along the supply chain, so WoolQ can start to be a data provider for industry platforms such as that.”

After spending $6.3 million on WoolQ in the five years to March last year, with no significant revenue and not meeting its own wool trading target, AWI was told by exporters and brokers it should stop spending grower levy funds on the WoolQ trading platform, investigate its sale, support one industry e-Speci, and focus on traceability.

WoolQ was initially called the Wool Exchange Portal, and grew out of AWI’s Wool Selling Systems Review that ran from 2014-2016. The review was initially set up to evaluate options for greater efficiencies and cost savings in wool ownership exchange, understand the potential for increased competitive tension throughout the wool selling process and determine “whether there is sufficient transparency within the exchange of ownership to allow wool growers to make the most informed commercial decisions about their wool growing enterprise.”

Mr Scott said AWI’s role in traceability will be as “a foundational piece” that connects up with other systems.

“There is a lot of work going on in the industry at the moment.

“Ourselves and AWEX are involved in a project at the moment — a huge cross-sectoral project with Meat & Livestock Australia as well – looking at an ‘Ausag’ data exchange,” he said.

“We know there is a wealth of data being collected by producers and by their business partners as well that can be used for the traceability, so we see WoolQ playing an ever-present role that broader network of data collectors and data providers.”

On whether eSpeci data that a grower chooses to bring back into WoolQ is available to AWI and how can it be used, Mr Scott said the data belongs to the grower, “as it always does”.

“We don’t use it for any sort of amalgamation or anything like that, our privacy terms are set out the same as they were when we started WoolQ on the FAQ.

“It is a pretty important question … when we are talking about how we can do this interoperability and share information, it’s critical that the owner of that data stays in control.”

“Whether it’s the bale descriptions, the bale weights, which will be test data, the various accounts and so forth, we need to verify that we are sharing like with like, but technically it is possible and that again, I would imagine would be a request from a grower to make that happen, and it could be done.”

In the webinar, Mr Scott outlined how WoolQ is a digital platform built for wool growers and their business partners “to connect and share data and information.” He gave an overview of the WoolQ’s current features and My WoolQ tools, including grower and group profiles, eSpeci and sustainability or integrity scheme details, the industry network and support sections, category indicators, the WoolQ forum and the linkage to Woolmark Learning Centre.

“On there (the centre) we’re building a price risk management course and some that is going to sit on WoolQ.”

Mr Scott said the WoolQ eSpeci will continue to exist until the integration to produce one eSpeci with AWEX is completed.

“The eSpeci is a critical piece of industry software, so not only does it provide the information of production for the sale, for the wool to sell, but it also provides that backbone and foundation piece for traceability.

“So on the AWEX collaboration, our approach is to partner with AWEX and not use our eSpeci but use their WoolClip specification and connect it to the WoolQ platform, which will allow any grower that wishes to send their WoolClip information to WoolQ,” he said.

“Again, it’s very important to note that no information is sent to WoolQ unless that individual grower wishes to do so.

“So they’ve got a WoolQ account and they want to see some of their information back in some of the analytics that WoolQ offers.”

Mr Grave said the eSpeci collaboration with WoolQ has been positive and the capture of on-farm data through eBale and WoolClip is an important foundation piece for supply chain traceability.

“The power of sending the information through to WoolQ is with the grower, if that’s where you want your information to go, it is certainly able to be done and that will be shared with WoolQ, to go through analytics and other services.”

He said by January next year both bodies will be supporting a single approach to on-farm data capture.

“So it remains the same and WoolQ Market is on hold until we hear otherwise.”

“WoolQ has been on hold for last 12 months or so as we look to engage with industry and look for the best use of that resource going forward,” he said.

“WoolQ is more than a market, and so we’ve continued over that time to offer the grower tools as well as having a few tweaks of these tools based on feedback.”

He said WoolQ is always looking for feedback and “always actively looking to collaborate” with the likes of AWEX and other industry bodies, as evidenced by the recent collaboration of AWI and AWEX on the eSpeci.

“It’s collaborations like that and other connections like that, and the profiling of farms, which allow WoolQ to act as a foundation for traceability, which is more important than ever.

“Beyond WoolQ, we recognize traceability is a critical piece for future-proofing our industry, both from a biosecurity perspective, but also to enable our brands and out Woolmark partners to connect and evidence the story of wool and maintain that market share,” Mr Scott.

On the industry’s transition from branded bales to eBales, AWEX chief executive officer Mark Grave said an implementation plan is being looked for the eBale project with RFID (radiofrequency identification) and QR (quick response) coded identification for on-farm and warehouse use.

“Over the last three months in particular, maybe it’s FMD-related (Foot and Mouth Disease), but there seems to be a greater urgency and preparedness for growers to be involved to improve the traceability system, and unique bale ID is a big part of that.”

Mr Grave said the AWEX board has discussed how the eBale system might be implemented across the Australian industry and he will be consulting with growers, and grower and industry organisations about an implementation plan.

“I’m expecting that that will be sooner rather than later.

“And one of the beauties of WoolClip is that it is already QR code-capable; that was one of the original concepts in producing WoolClip,” he said.

“And being able to share that data through to the broker of choice or through to WoolQ, again this is in the hands of growers, and it’s easily done and easily transitioned.

“So I’d expect you will see a lot more about this in the next four to six weeks,” he said.

Mr Grave said the interest in eBale among growers of all sizes has grown exponentionally.

“And the use of WoolClip plays nicely into that and into the conversation we are having today.

“So it’s well and truly on the radar and I’d expect in the next 4-6 you will start to hear a lot more about how we might move forward and implement eBale or RFID into the wool industry.”