All microns finished lower at the auctions, with the finer wools most affected.

The role of a reliable forward market should provide trustworthy and transparent price signals and better risk management across the supply chain. Although volumes remain modest at 63.5 clean tons — equivalent to about 500 bales — those signals were evident, with buying interest focused on the early New Year.

Those sellers that did engage were primarily taking the premium on offer in the 19 micron contract in 2022. Prices ranged from 1740 cents early in the week down to 1720 cents by the close on Thursday. Even at 1720 cents this equated to a 57-cent premium to the cash market. January traded at 1725 cents and March at 1740 cents, representing a carry return of more than 10pc compared to spot.

The 18 micron contract provided welcome volume for the middle of 2022, trading June, July and August at 2050 cents. This was a modest discount from spot, but still above the 75th percentile for prices over the last decade.

As indicated in the chart below, the forward market is still predicting a premium for 19 micron throughout 2022. With the 18 micron contract trading at 2050 cents mid-year and 1725 cents for 19 micron (basis 325), the market is predicting the basis between 18 micron and 19 micron to tighten from the current 410 cents to closer to 300 cents.

Next week we anticipate a consolidation with forward levels staying stable. Opportunities will likely present themselves for grower to hedge around the 1700/1710 cent level on 19 micron and 1270/1280 on 21 micron into 2022. 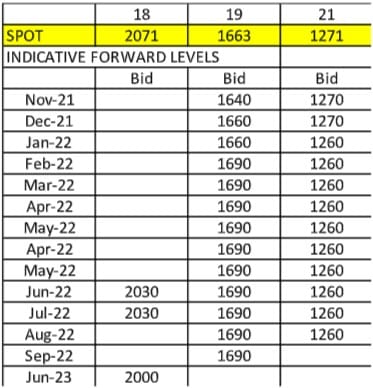