The research outlined in a report released by The Centre for Invasive Species Solutions (CISS) has found wild dogs in peri-urban areas are commonly infested with hydatid tapeworm (Echinococcus granulosus) and hookworms which present a health risk to humans.

Project leader and senior zoologist with Biosecurity Queensland, Dr Matt Gentle said while tracking wild dogs in peri-urban areas of north-eastern Australia over four years, he found they have the potential to impact both humans and animals. The research showed that wild dogs can live within 1 kilometre of urban residential areas in northern areas at all times.

“We not only found that wild dogs in peri-urban areas were responsible for attacks on livestock, pets and wildlife, but we also found that they were carrying parasites that could lead to diseases in humans, although attacks on people were rare,” Dr Gentle said.

In south-east Queensland and northern New South Wales, 201 peri-urban wild dogs were trapped and tested using microbiological and molecular methods. More than half the dogs harboured the hydatid tapeworm, more than a third had Spirometra erinacei tapeworms and about 28pc had hookworms. Other worms and some bacterial pathogens were also found.

“Given these potential impacts, it is essential that we develop strategies to both communicate and manage this risk in urban areas.

“Our findings recommend the development of a best-practice guide to highlight the strategies, practices and personal protective equipment required to minimise the risks of transmitting diseases to people, livestock and pets,” he said. 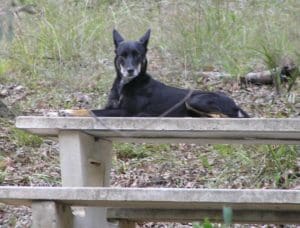 A wild dog on a picnic table in an urban area of south east QLD. Photo – Glen Alchin.

National Wild Dog Management co-oordinator Greg Mifsud emphasised that local authorities have been calling for the need to improve our understanding of the impacts of wild dogs in peri-urban areas, so that tailored management strategies and options can be developed for urban land managers.

“The report details a number of recommendations for land managers in both rural and peri-urban areas based on research conducted in south-east Queensland and northern New South Wales.”

The report recommended that wild dog control in peri-urban areas is warranted for conservation purposes and to protect pets and livestock. It also said the public need to be aware that wild dogs are encroaching on urban areas and should be vigilant when walking in bushland and with pets.

Appropriate signage and communication was recommended during control campaigns and all dog owners should avoid taking dogs into baited areas or keep them on leashes. Domestic and working dog owners also need to keep their animals out of PAPP-baited areas for longer than from 1080-baited areas,

The long-term peri-urban wild dog project in northern Australia was funded through the previous Invasive Animals CRC and the Queensland Government.