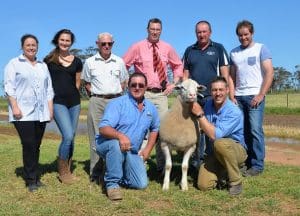 IT’S only been a week since the new Australian auction record for a meat breed ram was set at $68,000 by the Anden White Suffolk stud, but the list of potential semen buyers is growing.

There was a total clearance of 193 head for a $2154 average at the 21st Anden sale held by Andrew and Denita Donnan and family, representing a 75 percent increase in sale gross. Click here to get Sheep Central story links sent to your email inbox.

But some White Suffolk breeders were more interested in getting a piece of the new record-priced ram than in the sale result.

The Anden stud will retain 100 straws of semen from the record price ram as a condition of the sale and the Hull family said it would probably offer semen packages. Expressions of interest were being handled through Superior Selections before a final decision on how many packages would be sold, but Kattata Well stud co-principal Leroy Hull said more than 20 White Suffolk studs had already shown an interest in purchasing semen from the Anden ram the family had named Cruiser.

Leroy said the demand is coming from studs in all states and he expected semen sales would help the family recoup some of the purchase price.

“He is a good White Suffolk type and his figures go with it.”

The ram’s Lambplan figures included 13.31 weaning weight EBV, 19.98 for post weaning weight, -0.81 fat, 1.47 eye muscle depth; combining for a Carcase Plus index of 221.01 and L2020 index of 116.20. Leroy said the ram has been sent to Bordertown for semen collection to prepare for the stud’s first embryo transfer program.

The 140kg August-drop son of Kurralea 130305, was a factor in attracting 81 bidders from four states to register for the sale, and its conformation won it the supreme interbreed ram titles at the recent Adelaide Royal Show and at Hamilton Sheepvention.

Record-priced ram had figures and the type 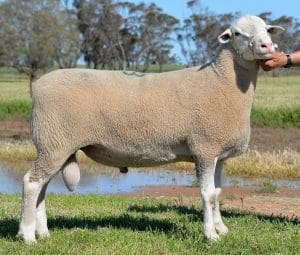 Kattata Well stud co-principal Geoff Hull said the family was delighted to be able to purchase such a high quality ram to follow on from our other recent top sire investments. The stud paid $22,000 for a Wheetelande ram at Adelaide last year.

“This ram is a complete package with huge growth for age and performance figures, is so structurally correct and has that wonderful and renowned Suffolk shape of wide and deep hindquarters and loin, with narrower shoulders and great neck extension for lambing ease,” he said.

Leroy said they had been unable to find anything to match the ram in size, stretch, type and breeding values to suit the stud’s breeding objectives.

“We are trying to boost our figures, so that is the main thing, but with his size and his type, to get those figures in other sheep you comprise that (type).

“He is so well-balanced.”

Underbidders at the sale included Anthony Hurst, Seriston stud, Avenue Range, South Australia, who went to $66,000 and John Jamieson, Wattle Park stud, Finley, NSW who went to $57,000. Elders stud stock auctioneer Ross Milne took 90 seconds to describe the ram to the gallery and just 130 seconds to sell him — from the opening bid of $10,000 to the $68,000 final price.

The previous record for the White Suffolk breed was $36,000 set in 2004 by the Detpa Grove stud, Jeparit, Victoria, and equalled by Anden last year when they sold one of their rams to the Ditchburn family, Kukerin, WA. The previous national meat sheep breed’s record stood at $44,000, set in 2011 for a Dorper.

The 21 2015 drop White Suffolk stud ewes sold to a top of $1300 twice and averaged $900 in the Anden sale. The Kattata Well stud paid the equal top price for two ewes and Ian Kyle, Ashley Park, Bairnsdale, plus a bidder via Auctions Plus network bid the $1200 second top price.