He might not be perfect but Dorper breeder Justin Kirkby was happy to pay $5000 for a big son of well-performed ram Dumisa Mr Perfect at Bendigo last weekend. 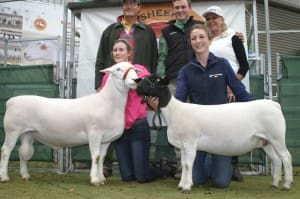 The 21-month-old ram was the heaviest in the sale at 109kg, and scanned with an eye muscle area of 42 square cm and fat of 6mm.

Justin also judged the Dorpers at the Australian Sheep and Wool Show before the sale and said he placed 120549, from Andrea van Niekerk of Dell Dorpers and Dumisa White Dorpers, third in its class.

“It t was only the fact that he wasn’t quite the head quality of the two rams in front of him that pinged him.

“He’s a big boy. His father (Dumisa Mr Perfect) was a ram that we used some semen from, and it worked pretty well.”

With no other sons of Mr Perfect coming up for sale, Justin said it was a good opportunity to buy the genetics and start a new breeding line in his Gravesend stud, run with wife Lorroi.

“We really needed another bloodline.”

The top-priced Dorper ewe was 12-month-old Dell Dorpers’ Lot 71 that sold to Nomuula Dorpers and White Dorpers of Moombi, NSW. The ewe was in lamb to Dell Dorpers Stretch Junior.